Pooper:
The Once-ler entrusts the last Truffula Tree seed to Ted, who manages to convince the Townspeople to let him plant it. We flash forward to find that multiple trees are now growing, and the Lorax (and the animals) returns to the valley.

Long Ending:
We begin in the domed and walled city of Thneed-ville, where everything within is made out of plastic or otherwise mechanized. The town is run by businessman Mr. O’Hare (voiced by Rob Riggle), who sells air to the citizens of Thneed-ville.

Meanwhile, a teenage boy named Ted (voiced by Zac Efron) has a crush on a girl named Audrey (voiced by Taylor Swift). Somehow, Audrey has learned that there used to be a thing called Truffula Trees that were incredibly soft and made air for free. She also mentions that she would probably marry the person who could ever find her one, causing Ted to become very interested. He returns home to his Mom (voiced by Jenny Slate) and Grammy Norma (voiced by Betty White). Grammy Norma tells Ted that outside of town lives a man named Once-ler (Ed Helms) who may be able to help him find a tree.

Ted leaves the town to find that the valley beyond Thneed-Ville is a wasteland. Mr. O’Hare makes many attempts to stop him from leaving town, but to no avail. Ted finds Once-ler and convinces him to tell his story. Once-ler says that when he first arrived in the valley, it was full of Truffula Trees and various wildlife. The soft tufts of the Truffula Trees proved the perfect material for his multi-purpose product called the Thneed. After Once-ler cuts down one tree, however, the guardian of the trees called the Lorax (voiced by Danny DeVito) appears. After some intial conflict, the Lorax convinces Once-ler not to chop down any trees (he plucks the Truffula tufts from the still-living trees) and the two reach a truce.

Although it takes time, the thneed begins catching on in the nearby town (which later becomes Thneed-Ville) and Once-ler’s greedy family comes to the forest to help him expand his business. Overcome by his family’s desires and the profits from the thneed, Once-ler disassociates from the Lorax and builds huge factories that pollute the environment while mass producing his product. Finally, the Once-ler’s company chops down the last Truffula Tree in the valley and his business crumbles as there is no longer any thneed material. Once-ler is abandoned by his family and the Lorax also disappears after taking care to evacuate all the animals from the wasteland. As the Lorax leaves, he etches the word “unless” onto a stone outside Once-ler’s house. We also discover that O’Hare was working as a sanitation worker and got the idea for the inflatable city and bottled air when everyone was complaining about the smog caused by Once-ler’s operations.

Once-ler entrusts Ted with the last Truffula Tree seed in existence, telling Ted that if someone cares enough they can change the future. Now Ted is motivated beyond his love for Audrey, and returns to Thneed-ville to try and plant the seed in the center of town. O’Hare discovers that Ted has the seed and tries to stop him. But with the aid of his Mom, Grammy Norma and Audrey, Ted succeeds in planting the tree. Ted also convinces the townspeople via song to give the tree and the environment a chance (Mr. O’Hare also attempts to sway the people his way through song, but he is booted from town).

The film ends as we see many new young Truffula Trees are beginning to grow. The Once-ler himself is watering some trees, when the Lorax and some of the animals re-appear, much to the Once-ler’s happiness. 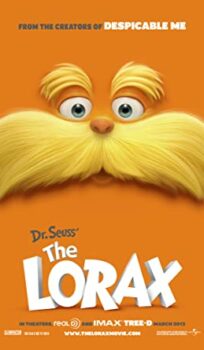