Four high school friends in the 1950’s form a gang (which they euphemistically refer to as a “social athletic club”).  They play pool, steal cars and get in fights.

Chico (Perry King) is after Jane, a rich high class girl.  She goes out with him a few times, but eventually dumps him.  The Lords go to beat up her new boyfriend.  He is  on the football team, and they make the mistake of attacking him outside the gym.  In short order, the Lords are running for their lives, pursued by the whole football team.  Butchey (Henry Winkler) runs into the street and is hit by a car.  However, other than a broken leg, he is fine.

Stanley (Sylvester Stallone) gets his girlfriend pregnant.  The movie ends at their wedding.

Having just graduated high school, and with the leader Stanley married, their carefree days of running around together are over. 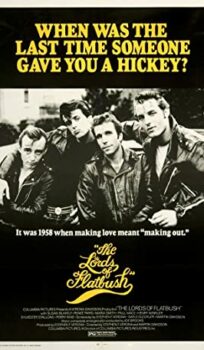