One by one, hidden Arab snipers pick off the members of the lost patrol and the reconnaissance pilot who managed to spot them (Howard Wilson), until the only remaining survivor is the Sergeant (Victor McLaglen).

Emboldened by their success, the Arabs finally emerge from hiding and approach the oasis in broad daylight, at which point the Sergeant mows them all down with the airplane’s machine gun.

He is eventually rescued by the remainder of the battalion when they spot the smoke from the airplane wreckage that the Sergeant had set on fire. 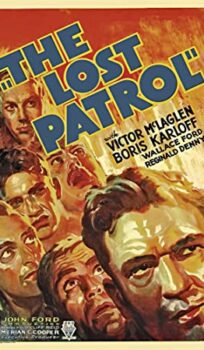