Long Spoiler:
In the beginning of the movie a teenage boy named Brent (Xavier Samuel) is driving his father somewhere when a boy, covered in blood wanders into the road. Brent swerves to miss him and crashes the car into a tree killing his father. The movie moves forward six months. Brent is clearly disturbed over the loss of his father, he wears a razor blade on a chain around his neck that he uses to cut himself with. Brent has a loyal girlfriend who loves him named Holly (Victoria Thaine), he and Holly are supposed to go to an “End of the Year Dance” at school that night. Lola, an outcast shy teen girl asks Brent to go to the dance with her and he refuses politely saying that he’s going with Holly.

Later that day Brent is out hiking with his dog when suddenly someone comes up behind him putting a black bag over his head and dragging him away. Holly arrives at Brent’s house to pick him up for the dance and Holly and Brent’s mom realize Brent is missing. Meanwhile, Brent wakes up at Lola’s house, tied to a chair that is bolted to the kitchen floor. At the table sit’s Lola, her Daddy (John Brompton) and an elderly woman with a scar on her forward, she seem’s brain damaged, Lola calls her “bright eyes” and later calls her mom. Lola’s house is decorated for an “End of the Year dance”, just like at school, everyone at the table has been dressed up for the party. It quickly becomes clear that Lola and Daddy have a mutual incestuous relationship. It also becomes clear that Lola and her Daddy have been abducting, torturing and sometimes killing people for a long time. Lola keeps a scrapbook of all the boys she has tortured. After Brent wakes up, they inject what looks like window cleaner into his neck. The torture of Brent begins with threats, like threatening to nail his private parts to a chair if he refuses to pee in a jar, then Brent escapes and they catch him by knocking him out of a tree with rocks. They take him inside and nail his foot to the floor using a knife and a hammer. Lola proceeds to carve a huge heart and her initials into Brent’s chest with a fork. Finally Lola dances with her father, confessing that she’s in love with him, as they are about to kiss Brent continues to attempt to cut through the ropes around his wrists using the razor blade he had around his neck.

Lola starts her end game confessing that all of their victims had a hole drilled in their forehead and then they pour a teakettle of boiling water into the hole which boils their brains and some of her former victims that survive are thrown into a dungeon basement under the kitchen floor and they are basically animals who live on road kill and the bodies of the victims who don’t survive. Lola and Daddy start drilling a hole in Brent’s forehead while Brent continues to cut away at his ropes. Lola is about to pour the boiling water when she asks her daddy to cut a bigger hole, which her does. Once he’s finished drilling a bigger hole Brent breaks free, slices the dads face and stabs him in the neck. Brent knocks out Lola pushes Lola’s dad into the basement hole, seeing 3 sickly boys eating Daddy. Lola comes too and pushes Brent into the hole, Brent has to kill all three of the brain damages boys with a hammer to survive, he realizes that one of the boys is the bloody teen boy he had swerved to miss in the beginning of the movie. Lola goes even crazier after the death of her daddy, she smothers Bright Eyes (her mom) with a pillow.

Meanwhile, Brent’s girlfriend remembers that Brent had told her that Lola had asked him out, she notifies the cop on the case and he drives out to Lola’s home where he see’s all the blood through a window and goes into the house. Lola kills him with a meat clever to the head and pushes him into the hole with Brent. Lola informs Brent that she is going to his house to stab his mother in the neck and his girlfriend in the heart. She starts walking to Brent’s house, wearing his razor blade necklace, barefoot and covered in blood. Brent climbs out of the hole using a stack of dead bodies.

As the sun rises Holly decides to drive to Lola’s to look for Brent, on her way there Lola see’s the car throws her scrapbook at the windshield and Holly stops, Lola jumps into the car and tries to kill Holly with a knife. Holly gets away and goes running down the road with Lola chasing behind, Brent is in the cops car driving toward them, he barely misses Holly and hits Lola with the car. Holly runs to the car and hops in, they hug. Suddenly they hear Lola, broken bones and all, dragging her bloody self down the road toward their car, knife in hand, (because we all know it’s really hard to kill that kind of crazy). Brent and Holly put the car in reverse and we see them as they back over her head. 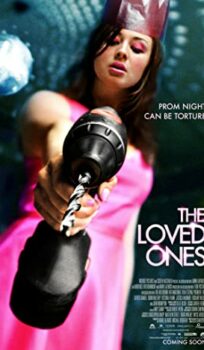