Susie Salmon (Saoirse Ronan) gets trapped in Mr. Harvey’s (Stanley Tucci) underground bunker while walking home from school.  He created this room to capture, touch and kill a young girl.  Mr. Harvey is a serial murderer who lives across the street from Susie.

Jack Salmon (Mark Wahlberg) gets obsessed with who may have killed his daughter.  Abigail Salmon (Rachel Weisz) can’t take it and leaves the family home for California.  Grandma Lynn (Susan Sarandon) moves in to take care of things.

Lindsey Salmon (Rose McIver), Susie’s younger sister, thinks that Mr. Harvey had something to do with her sister’s death.  She breaks into Mr. Harvey’s basement.  She finds his notebook which has a lock of Susie’s hair.  She escapes from his upper story window and runs home.  Just in time to see that her mother has come home.  She shows Grandma the book.  The police search Mr. Harvey’s home.

Unfortunately Mr. Harvey took the one piece of evidence he had left.  Susie’s remains in his basement safe.  He tosses it into the sinkhole and drives away.

Susie gets to come back and get her first kiss from Ray Singh (Reece Ritchie) before moving on permanently.

It ends with an aged Mr. Harvey being distracted from a falling icicle and plunges down a cliff to death.  It appears he broke bones and lands hard with snow on top of him. 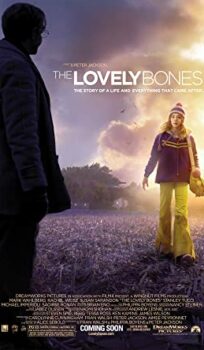