SHORT VERSION:
With the help of Columbus and his other animal friends, Pico rescues Marilyn from the Swarm Lord in his temple, and as the temple comes crumbling down, the Swarm Lord gets squashed and killed by Columbus when he falls on top of it with a golden idol he finds. As the gang make their way back to the ships, they cross paths with the natives, who thank Columbus for doing away with the Swarm Lord. He asks if he can keep the golden idol he found, and they let him (mainly because it is gold-plated and therefore worthless).

Columbus, Pico, the other animals, and the human crew set sail back to Spain, with Columbus happy that he has discovered the New World and proved – thanks to Pico – that the world is round. He then muses about what will become of the New World in the future, and we see the area slowly transform into modern-day New York City.

LONG VERSION:
As Columbus (Dom DeLuise), Pico (Corey Feldman), the crew, Mortimer the seagull, and the trio of rats are approaching the New World, the Swarm Lord attacks them and causes the Santa Maria to run aground. One of the rats is killed, and Pico spots the Swarm Lord heading back to his temple, where he is holding Marilyn (Irene Cara) captive in a honeycomb tower within. Pico and the two surviving rats soon befriend a beaver named Bob, whose dam was smashed up by the ship. After telling him that the Swarm Lord had attacked them, he decides to take them to the Swarm Lord’s temple, and mentions how the Swarm Lord has been oppressing the land for quite some time. Columbus – knocked off-balance mentally by the crash – goes after them, with Mortimer trailing behind and the crew staying with the remaining ships.

The whole gang minus Mortimer manage to get inside the temple and see Marilyn surrounded by the Swarm Lord at the top of the honeycomb tower, and as Columbus ascends the tower to get to what he thinks is the gold he sees (which is actually just Marilyn’s glow), Pico drills his way up through the tower to get to her while Bob starts chewing through the base of it to bring it down. Columbus gets the attention of the Swarm Lord and gets into a fight with it, and Pico gets Marilyn to safety just as Bob chews through the tower enough to get it to start collapsing, and the temple along with it.

As the animals make their escape, Pico sees the Swarm Lord getting the better of Columbus, so he tells the others to go on while he stays to help him. The Swarm Lord throws Columbus up into the air and causes him to land on a golden idol, and then he fights Pico. When the Swarm Lord attempts to kill Pico, Mortimer flies in and gets Pico out of harm’s way and out of the temple, and then the temple’s crumbling causes Columbus to fall with the idol and land on top of the Swarm Lord, squashing it dead. Columbus, Marilyn, Bob, and the rats get out and land in the river below the temple just as it becomes rubble. They all end up going over a waterfall, and though Pico tries to save Marilyn by having Mortimer fly in low to get her, he fails to catch her.

Pico finds Columbus and the other animals alive on the beach, but a lifeless Marilyn soon floats in on a lily. Just as Pico and the others begin to mourn for her, the sun rises, and its light touches her and restores her to life, and she and Pico kiss. As the group makes their return to the ships, they run into the natives, and the chief thanks Columbus for getting rid of the Swarm Lord. Columbus asks if he can keep the gold idol, and the chief allows him to (mainly because it is gold-plated and therefore worthless).

Columbus, the animals (Bob included), and the crew sail back to Spain, and Columbus is happy that he has discovered the New World and proved – thanks to Pico – that the world is round. Columbus then muses about what will become of the New World in the future, and we see the land that they are leaving from slowly transform into modern-day New York City. 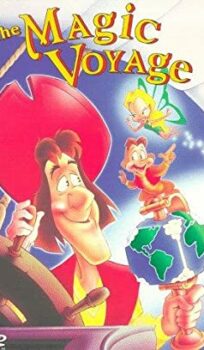