The fourth and final film in the Magnificent Seven series.

POOPER
Del Toro is killed and his men flee, but of the seven, only Chris, Noah, and Skinner survive.  The three choose to remain in Magdalena and start new lives.

LONG VERSION
Chris Adams (Lee Van Cleef) is now a US Marshal in Arizona, and newly married to Arrila (Mariette Hartley).  Chris has just rescued his bounty hunter friend Jim (Ralph Waite) from an ambush, who then asks him to join his mission to protect the small Mexican town of Magdalena, where he is the sheriff, from the bandit Juan Del Toro and his men.  Chris refuses, citing his new job and wife as the reasons to say no.  Chris is also being shadowed by Noah Forbes, an unemployed newspaper writer who wants to write Chris’ life story.

Arrila begs Chris to release young Shelly Donovan from jail, who was arrested for robbing a store.  At first, Chris says no, but eventually does just as Shelly is about to be loaded on the prison wagon.  Shelly and his two friends the Allen Brothers (one played by Gary Busey) celebrate his freedom by robbing a bank.  In the resulting shootout, Chris is wounded, and Shelly kidnaps Arrila.  Two days later, Chris awakens and rides out into the desert to kill Shelly and the Allens with Noah riding along.  They soon find Arrila’s dead body, and later the Allens.  After they tell Chris that Shelly left them to go to Mexico, he kills the brothers.

After crossing the border, Chris and Noah come across Jim and several hired guns who are trying to ambush Del Toro and his men.  Jim tells Chris that he has seen Shelly, and he is now part of Del Toro’s group.  After riding off to continue to look for Shelly, Chris and Noah hear gunfire and circle back, only to find the hired guns dead and Jim missing.  Thinking he returned to Magdalena, Chris and Noah ride there.  They quickly dispatch the few bandits in town, and rescue the women and children, led by Laurie Gunn (Stefanie Powers).  Knowing they couldn’t survive the trip through the desert back to Arizona, Chris and Noah tell Laurie and the ladies they will return with reinforcements.  While riding back, they come across the dead bodies of Shelly and Jim, who apparently shot each other.  Seeing that Jim finished Chris’ mission, Chris vows to finish Jim’s mission and protect the town and it’s women.

Chris and Noah travel to the Tucson Prison and, with the Governor’s permission, arrange for five prisoners that Chris has arrested in the past to be paroled and join him.  The five are Walt, Pepe, Skinner, Elliott, and Captain Hayes.  Upon completion of the mission, they will be given an official pardon.  The seven ride to Del Toro’s hacienda, where they kill the guards, pillage the home, and kidnap Del Toro’s girlfriend.  The seven load up a wagon with weapons and explosives and, along with the tied up girlfriend, head out to Magdalena.

After reuniting with the women of Magdalena, Chris tells everyone the plan.  They will dig trenches, build barbed wire barriers, and use the explosives and guns to fight Del Toro and his men.  Everything is built within two days, and on cue the bandits attack.  The trenches and barriers work, and the seven (with the women reloading the guns) are able to cut down many of the bandits.  During the shootout, Walt, Hayes, Elliott, and Pepe are killed and Noah is wounded.

The fighting eventually reaches the town, where Chris has rigged a huge explosive in the chapel, which he will only use as a last resort.  He would lure Del Toro and the bandits into the chapel, then set it off, killing everyone inside (including himself and the women).  As gunshots are getting closer to the chapel, Laurie is in charge to setting off the explosive.  Before she sets it off, she frees Del Toro’s girlfriend, who runs outside and his promptly shot to death by Del Toro.  As he stands there stunned at what he has just done, Chris shoots and kills Del Toro.  The remaining bandits, seeing their leader dead, flee the town.

Days later, with the town cleaned up, Chris and Noah are ready to return to Arizona.  The newly-pardoned Skinner has decided to stay in Magdalena, and Chris names him the new sheriff.  Laurie, who is falling for Chris, tells him there is no reason to return, so Chris decides to stay with Laurie, and he tells Skinner he has been demoted to deputy.  Noah, who also found a new girlfriend, chooses to stay as well to write Chris’s story, which now has a proper ending. 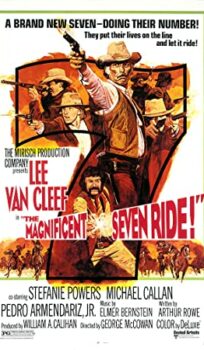