Roger Barlow (Christopher Walken), Charles (Morgan Freeman) and George McLendon (William H. Macy) are security guards at a Boston art museum.  They have a passion for certain art pieces they have been securing.  When those pieces are sold to a museum in Denmark, they decide to steal the pieces for themselves and replace them with fakes.

Roger finally goes on vacation with his wife (Marcia Gay Harden) to Florida.  While there he discovers his wife is similar to the lady in his painting ‘The Lonely Maiden’.  He falls back in love with his wife.

After the heat has cooled down we find that the real pieces have been set up in a mini-museum at Charles apartment complex.  Roger sits and gazes at his painting.  Then realizes he doesn’t get the same pleasure as he has a real ‘lonely maiden’ at home waiting for him. 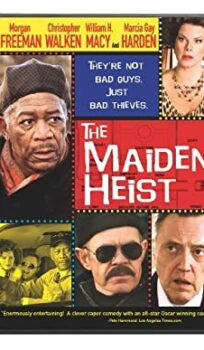