Short Version:
John Oldman tells his friends he is 14,000 years old, an immortal who never ages. Whilst he never proves it conclusively, it appears to be true.

Long version :
Friends gather to wish farewell to John Oldman (David Lee Smith), who has decided to move away for unspecified reasons. He begins a discussion about what a man from the distant past might be like before making an admission – he is such a man, a freak of nature born 14,000 years ago who reached the age of 35 and then never aged again. He is moving, he says, because he has always done so about every ten years, so that people don’t notice that he doesn’t age.

Everybody believes that he is just spinning a tall tale – his claims include living through the tail end of the last ice age, seeing the emergence of agriculture, living in ancient Babylon, studying with Buddha himself in India, being a friend of Van Gogh – he has a painting that he claims is a Van Gogh original – and so on.

Perhaps most startlingly, he claims to have been Jesus – passing on a modernised version of the teachings he learned from Buddha when he lived in the middle east. He says the bible version is largely fictionalised, as he performed no miracles and never claimed any divinity – but he did survive his own crucifixion by blocking the pain and slowing his heart and breathing as he had learned in India before “coming back to life” in front of witnesses.

Eventually psychiatrist Dr. Will Gruber (Richard Riehle) angrily threatens to have John committed for observation if he won’t admit that his story is a lie. John responds by saying that it is indeed just a made up story. But afterwards, he admits to Sandy (Annika Peterson) that he only said that to comfort them; his story is true. As he discusses previous names he has used with her, Gruber recognises one and realises that John is his father. The shock makes Gruber collapse and die of a heart attack.

In the end John leaves with Sandy, who has said she is in love with him, rather than leaving alone as he had planned.

Ultimately it is never definitely established whether John is what he claims to be, though it is strongly implied that he is. 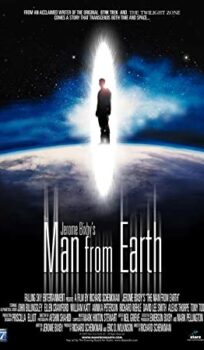