Will Lockhart shows up in the frontier town of Coronado, leading a wagon train.  The town is dominated by Alec Waggoman, who owns most of the land around.  Dave Waggoman is Alec’s sadistic son.  Will and Dave have several confrontations.  It turns out that Will is really a cavalry captain, there to find out who is selling high powered repeating rifles to the Apaches.  Will’s brother died when his cavalry patrol was ambushed by Apaches with greater firepower.

Dave Waggoman, and their ranch foreman Vic, are the ones selling the rifles to the Apaches.  Vic was like a 2nd son to Alec, and Alec had told Vic that Vic would inherit part of the ranch.  However, Alec is getting old, and he reveals to Vic that this was just a ruse to keep Vic working on the ranch.  The ranch will all go to Dave.  Dave is jealous of Vic and hates Vic, so Vic will be thrown out with nothing.

Dave and Vic have a fight over the sale to the Apaches, and Vic kills Dave.  Alec starts reviewing the accounts, and realizes that somebody in the ranch paid a huge amount for an unknown wagon load.  Alec realizes that this must have been the repeating rifles, and so Alec starts searching the ranch for them.  Vic does not want Alec to find the rifles, so he pushes Alec over a cliff.  However, Alec lives and is found by Will, who is also searching for the rifles.  When Alec recovers, he informs Will that Vic is behind it all.  Will finds Vic at the hiding place, signaling for the Apaches to come get the rifles.  Will pushes the wagon with rifles over the cliff, so the rifles are destroyed.  The angry Apaches think Vic double crossed them, and kill him. 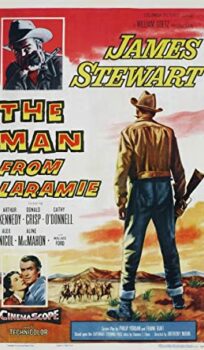