Submitted by Steve and Marisa

SHORT VERSION
Jim captures the entire brumby mob and gets his horse back.  He refuses Harrison’s reward money and tells him that it’s up to Jessica to decide if she wants to be with him.  He then returns to Snowy River to reclaim his father’s cabin.

LONG VERSION
Set in Australia in the 1880’s, Jim Craig (Tom Burlinson) is the son of mountain man Henry Craig, as well as the sole heir to Henry’s cabin.  They live in the Snowy River section of the mountains.  After his father is killed by a brumby mob (a pack of wild horses), led by a thoroughbred stallion, Jim is told by his neighbors that he cannot stay in the cabin until he has earned the right to live the mountains.  So Jim goes to the cabin of Henry’s friend Spur (Kirk Douglas), a miner with a wooden leg and his father’s partner.  Spur gives Jim one of his horses (Jim’s horse, a brood mare named Bess, joined the brumbies) and goes to town to find work.  While in town, he encounters Harrison (also played by Kirk Douglas), the richest man in the district.  Harrison and Spur became estranged 20 years prior when they both fell in love with the same woman.  Harrison offers Jim a job after watching him calm Harrison’s  new, and very expensive (1000 pounds) thoroughbred colt, who became spooked while being unloaded from the train.

While Harrison and his men are out on a cattle drive, Jim befriends Harrison’s daughter Jessica (Sigrid Thornton), a strong-willed independent woman.  She challenges Jim to break-in the colt, which he does successfully.   One day while riding the colt Jim catches sight of the brumby mob that killed his father and stole off with Jim’s horse, Bess.  In an attempt to reclaim Bess, Jim foolishly gives chase on the colt and is subsequently thrown when the colt refuses to jump a fence.  He has a close encounter with the old thoroughbred that leads the mob before losing consciousness.  Jim is recovering in bed when Harrison returns and gives Jim the task of collecting the stray cattle before any mountain men get “their grubby hand on them.”  After Jim leaves, Harrison discovers that the colt has been ridden and Jessica confesses the truth to her father.  Furious, Harrison tells Jessica that JIm will be fired and that she will be sent off to boarding school.  When Jessica objects Harrison slaps her and tells her that she is “deceitful, just like her mother.”  A distraught Jessica rides away to the mountains to find JIm, but is caught in a sudden storm and falls down a cliff face.

The next morning, Jim, who has already found the missing cattle, discovers Jessica’s horse, Kip, dead and frantically searches for Jessica.  He later finds her and rescues her from the side of the cliff.   While recovering from the ordeal, JIm and Jessica confess their feelings for one another and consummate their relationship.  JIm then takes Jessica to Spur’s cabin so that Spur can return her home while Jim rides back up to retrieve the cattle.  Spur returns Jessica to her father and has a heated exchange with his brother after Harrison insults Jim.  Jim and Spur then take off back to the mountains.  It is revealed to Jessica, by her Aunt, that Spur and Harrison both fell in love with the same woman, Jessica’s deceased mother,Matilda.  Matilda, unable to choose which brother to marry, told them that she would marry whomever made their fortune first.  Spur tried to make his fortune mining gold in the mountains while Harrison got lucky at track and ultimately won Matilda’s hand in marriage.  Out of love, Spur gives Matilda a thoroughbred colt, also by Old Regret.  When Harrison finds out about the horse he vows to kill it and Matilda runs to Spur to warn him.  Harrison discovers the two and In a fit of jealous rage shoots Spur’s foot.  The colt is later released into the wild and we learn that he is now the leader of the Brumbies.  Jessica’s mother left Harrison “of her own accord” when Jessica was born.
After returning to the mountains, Jim and Spur encounter Clancy, a renowned horseman and good friend to Jim’s father and Spur.  Clancy tells Jim that someone released Harrison’s colt and that Jim is being blamed for it.  Clancy has tracked the colt to the brumby mob and tells Jim that they will be going after the colt the next morning.  He and Spur both encourage Jim to clear his name and prove his manhood by helping with the ride.  Though resistant, Jim ultimately meets up with Clancy at Harrison’s where a 100 pound reward is being offered for the return of the colt.  A spectacular chase takes place across the mountains and through water, but the group decide to give up on the chase once the stallion leads his herd over a very steep slope.  While the other riders rein their horses in Jim jumps over the side of the mountain in hot pursuit  (very awesome scene and clever reference to the original poem).  The rest of the riders head back to Harrison’s believing the herd is lost.  However, Jim is later spotted riding down the herd (another awesome scene).  He subdues the stallion and assumes leadership of the herd.  Later her is observed single handedly herding the  mob to the stock yard.

Jim is retrieves Bess and returns the colt to Harrison.   Harrison offers Jim the reward, but he refuses it, claiming that’s not why he rode.  He just wanted to clear his name, get Bess back, and claim everything else that was his (looking right at Jessica as he was saying this).  When Harrison begins to argue, Jim cuts him off by telling him that it’s up to Jessica to decide if she wants to be with him, and if she does, you can’t stop her.  Jim promises to return soon to reclaim the horses from the mob that are now rightfully his, and he rides off.  The movie ends with Jim returning to Snowy River to reclaim his father’s cabin, having proven that he deserves to live there. 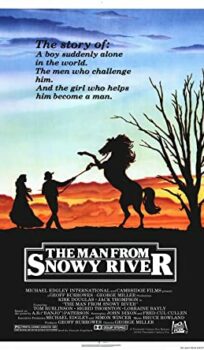