The Man who Invented Christmas(2017)

Charles Dickens (Dan Stevens) goes to the old factory he worked at as a child and confronts his past. Scrooge (Christopher Plummer) says they’re the same person and that Dickens will end up like him. But Dickens finally forgives his father, repeating what his father taught him, that no one is ever truly worthless who lightens the cares of others. He then puts Scrooge in a grave, but as the walls close in on Scrooge, Scrooge promises to change and live the spirit of Christmas all year round.

This causes Dickens to realize that people can change and he runs home and finally is able to break through his writer’s block and write the last chapter, saving Tiny Tim and letting Scrooge find redemption.

Tara comes by to return the book Charles lent her and he is able to apologize for firing her and rehires her. He and his wife patch up their differences and Charles invites his parents to spend Christmas with his family.

Christmas Carol comes out in time for the holiday, Thackeray gives it a glowing review, and the book is sold out by Christmas Eve. Forster’s sweetheart’s father allows the two to become officially engaged and together, everyone has a wonderful, merry Christmas. 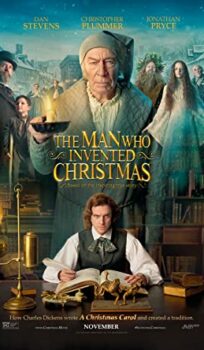