Wallace Ritchie (Bill Murray) is a middle aged loser who works at the Blockbuster video in Des Moines Iowa.  His younger brother, Jimmy,  is a successful businessman living in London.   As a birthday present to himself, Wallace flies to England to surprise his brother.  Jimmy is very happy to see his brother, but there is a problem.  That evening, Jimmy has a dinner party in his house to make a major presentation to German clients.  He thinks it would not work well to have Wallace there.  Jimmy sends Wallace for the evening to “The Theater of Life”, and interactive audience participation free form theater.  Wallace is to wait by a public phone telling him where to go, and what part he will play.  Of course, Wallace answers the wrong phone.  He gets a call meant for a hitman, instructing him to go to an office, kill a lady and retrieve some letters.  The hitman gets Wallace’s call, and ends up killing one of the actors.

Wallace decides to help the lady, Lorelei (Joanne Whalley).  There is a banquet that night in London, where 2 ambassadors are going to sign a major treaty.  The bad guys want to prevent that.  There is a bomb hidden in a decorative Russian doll that is on the table.  It will explode killing the ambassadors.  Lorelei has letters that reveal the plot.  Wallace is clumsy and clueless, but as he bumbles around he is solving everything.  Various German, Russian and other spies and hitmen are sent after him.  They are killing each other off, but all think it is Wallace doing it.  They are coming to believe he is an American super spy.  Wallace still thinks it is all the theater show.

Wallace ends up at the banquet dinner dressed up as one of the costumed entertainers.  He gets a suitcase with $3 million from the bad guys.  The bad guys try to escape in a helicopter, but the bomb/doll ends up in the helicopter with them, and it explodes in midair.  At the end, Wallace and Lorelei are living it up at a beach resort with the money.  The waiter comes bringing drinks.  Trying to get out of his lounge chair, Wallace knocks the waiter out and splashes the drinks.  2 CIA agents come up.  The drinks were poisoned, and the waiter was an agent.  They are in awe of Wallace, and offer him any amount to work for the CIA. 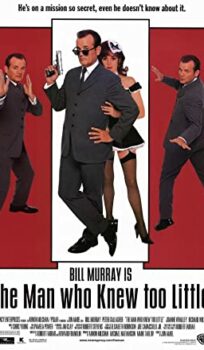