In 1930, Dr. Leon Kraval (Boris Karloff) is a reclusive pioneer in curing cancer by means of Frozen Therapy. Having been rejected by the medical establishment, he is treating a wealthy patient in a glacial lab beneath his secluded house. The man’s greedy nephew leads the police to arrest Kraval as a quack.  A struggle spills the freezing chemical. The men inhale it and are rendered unconscious in Kraval’s icy deep freeze.

Ten years later a young doctor, fascinated by rumors of Kraval’s advanced research, locates Kraval’s remote home. The doctor and his nurse fiancee discover the frozen men and are shocked to find them still alive. All are revived safe and sound, proving Kraval’s formula works.

Kraval rejoices that his frozen therapy will cure many diseases free of charge and promises to share the formula with the world. The greedy nephew, however — furious that he was declared dead ten years before and so can inherit nothing from his dead uncle — throws Kraval’s written formula in the fire. The enraged Kraval shoots the nephew dead and forces the others to be guinea pigs as he races to reconstruct the formula by trial and error.

Soon all the men are dead, forcing Kraval to experiment on the girl. It is a success; Kraval lowers her body temperature to below freezing and revives her with no injury. The police break in and shoot Kraval.  He hands the perfected formula to the young doctor, urging him to take frozen therapy to the world as the blessing he’d originally intended, and dies. 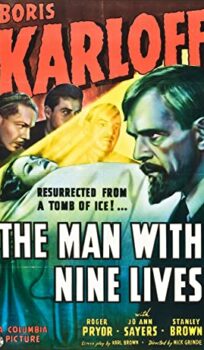