The movie is pretty faithful to the book, so if you’ve read the book, expect no surprises.

Flight Director Mitch Henderson (Sean Bean, who does not die in this movie like most other characters he has played) secretly sends the rescue trajectory to the Ares III crew after the NASA Administrator (Jeff Daniels) vetoes the rescue mission. Henderson is forced to resign for this breach of the chain of command.

The Ares III crew returns to Mars orbit. Whatney takes the Mars Rover, which he has jury rigged with a lot of upgrades to make the long trip, to the location of the prepositioned Mars Ascent Vehicle for the Ares IV mission that would have arrived years later.

Whatney removes a lot of weight from the MAV and launches it to meet the Ares III in Mars orbit.

But, the MAV ends up in an orbit too low to make a rendezvous. So, Whatney punctures his spacesuit to become “Iron Man” and is propelled over to where Commander Lewis (Jessica Chastain) is tethered to the passing Ares III spacecraft. (This is the only glaringly goofy moment in a movie that otherwise really tried to get the science right.)

Whatney returns to Earth to become a trainer for future classes of astronauts.

The interesting subplot where NASA cooperates with the Chinese is in the movie, but the rover turning over during the descent down the crater rim to get to the MAV is not. 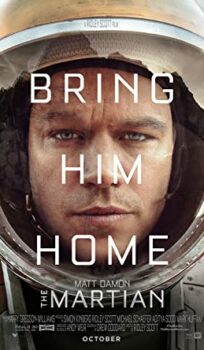