Elena Montero (Catherine Zeta-Jones) learns that Don Diego de la Vega (Anthony Hopkins), the old Zorro, is her real father, not Don Rafael Montero (Stuart Wilson), and helps him escape Rafael’s hacienda and get to the gold mine. Alejandro Murrieta (Antonio Banderas), the new Zorro, kills Capt. Harrison Love (Matt Letscher), avenging the death of his brother Joaquin (Victor Rivers) at his hands. Don Diego kills Don Rafael, but not before Don Rafael shoots him in the stomach and mortally wounds him.

The mine is about to explode and threatens to kill all the workers, locked up in cells by Don Rafael’s and Capt. Love’s soldiers (This was done so there wouldn’t be any witnesses to tell General Santa Anna about the mine and the fact that Don Rafael was attempting to buy California from him with gold dug from his own land), but Elena and soon Alejandro free them all and get them to safety before the mine blows up.

Don Diego dies of his wound, but he gets to see Elena one last time before he dies. It is revealed that Alejandro and Elena have gotten married, and they have a baby son, Joaquin (Kelsie & Kaylissa Garcia), whom Alejandro had been telling this whole story to. He also said that the people of California gave Don Diego a very grand funeral, to say goodbye to the original Zorro. 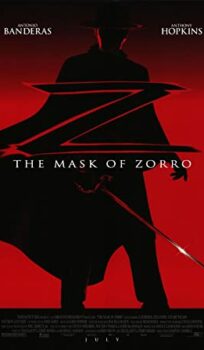