Neo (Keanu Reeves) meets with The Architect (Helmut Bakaitis), the program that created the Matrix, who tells him that the prophecy of the One ending the war was a lie. The One’s purpose is not to end the war, but to rebuild Zion after its destruction by the machine army to continue a never ending cycle of destroying and rebuilding Zion to keep the machines in control. Neo is told that if he does not comply with this system, the Matrix will crash, which, coupled with Zion’s impending destruction, will result in mankind’s extinction.

However, Neo chooses to not go along with their plan and instead save Trinity (Carrie-Anne Moss) from being killed by an Agent. The Matrix does not crash because the machines have no concept of choice.

In the real world, the machines attack the Nebuchadnezzar and destroy it. As Neo, Trinity, Morpheus (Laurence Fishburne) and Link (Harold Perrineau) are running away, Neo, because of his connection to the machine mainframe, can now override the Sentinels and kill them. This puts Neo into a coma just as the crew are rescued by Roland and his ship.

Roland ( David Roberts) informs the crew that the fleet’s counter attack against the machines failed when someone triggered an EMP early, immobilizing the fleet, allowing the machines to kill them all. One survivor was found: Bane, who was infected by Smith… 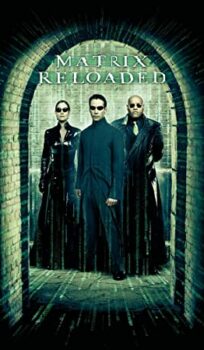