Both Nancy (Jodie Foster) and Col. Couch (Benedict Cumberbatch) come across a major revelation in Mohamedou’s (Tahar Rahim) case; she receives it in a letter from Mohamedou, while Couch learns from it from an MFR that was part of the case and, which, incidentally, his superiors, Gen. Mandel (Matthew Marsh) and Col. Seidel (Corey Johnson), were very adamant about it not being known: the Military eventually stepped in and took the procedures against Mohamedou off the hands of the civil interrogators, thus escalating to a cycle of brutal physical, psychological and EVEN SEXUAL torture -with visuals of a female guard openly raping him-, all under the direct consent and order of Mandel, to coerce a confession from Mohamedou. The culminating move was when Mandel threatened to have Mohamedou’s mother brought to Guantanamo and raped by everyone in the premises, at which point he broke, conceded and gave a false confession about being one of the top minds behind 9/11. Nancy is visibly shaken by this and even at odds with her associate Teri (Shailene Woodley), while Couch prefers to drop the case and resign from his position, ostracized and disowned by the entire department.

Eventually, in 2009, after a 4-year struggle to bring his case to a court, Mohamedou gets his chance, via video link, and even gives a powerful, moving speech about how he will no longer hold grudges against those who have wronged him, all those years, while detained. Sometime later, he receives a letter from Nancy, which indicates he succeeded and has been ordered to be released. However, the screen goes black and some brief title cards indicate that, despite this, the Government appealed this ruling and he was forced to stay another 7 years in prison, being finally released, with no formal charges, in 2016 -which we, then, see, as he is sent away in a military plane-.

More title cards inform, towards the film’s conclusion, that Mohamedou never got to see his mother again, as she died in 2013, while he was in custody. We also see footage of the real Mohamedou returning to his hometown in Mauritania and being joyfully received by everyone. He went on to marry an American lawyer named Kitty and have a son named Ahmed; unfortunately, due to his legal problems, he hasn’t been able to leave Mauritania again nor see his family and hopes a country will grant them all protection and legal status to be together. Also, Nancy, Teri, and Couch have all carried on with their respective work. The final images show Mohamedou gifting both Nancy and Teri with necklaces that have their respective names engraved, in Arabic, in gratitude for all they did for him; also, him gleefully listening to Bob Dylan’s “The Man In Me”, which he identifies to, as a metaphor for his own struggle. 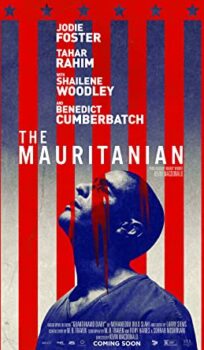