Longer:
A young man wakes up in a cage elevator, being lifted into an open area where a group of about 3 dozen teenage boys / young men are living. He remembers nothing, but they tell him this is normal and that in a few days he will remember his name (when he does, it’s Thomas). He learns that a new boy is brought up about once a month with supplies in the elevator, always with amnesia and the elevator does not leave if anyone tries to leave with it.

The boys are in a glade and forest area encircled by a massive stone wall that opens daily to reveal a maze with murderous creatures in it. Some have been given the task of mapping the maze but it changes daily, and no one who has ever been left inside the maze when the gate closed has survived. Thomas is curious about everything and wants to examine the maze but the boys have compiled rules for themselves and anyone who is not a designated maze runner is not allowed in. Alby is a leader, the first one who woke up in the maze, and he helps Thomas adapt.

The creatures (“grievers”) become more aggressive, and Thomas’s arrival is soon blamed for things getting worse for the group. The elevator arrives again, this time with a young woman who seems to recognize Thomas; she is holding a note that reads “This is the last one ever.” She soon remembers her name is Theresa. The two of them have dreams in which they hear “Wicked is good.”

The other boys mistrust Thomas, convinced he is the cause of the deteriorating conditions. They discover that one of the hazards, the grievers’ sting, actually helps the victim regain their memory, if they survive the sting (they have a small amount of antidote that Theresa brought with her). Alby is cured of a griever’s sting by this antidote but later killed by another griever attack.Thomas gets deliberately stung, then remembers that he and Theresa are scientists studying the boys and the maze is a test.

Some follow Thomas and Theresa through the maze trying to escape while others stay behind with Gally,somewhat of a bully and one who blamed Thomas for everything. They escape through the maze, into a lab with seemingly dead scientists and a video playing, telling them of global destruction by something called “the flare” and the experiment that they were part of, trying to find a cure. As Dr. Paige speaks on the video, soldiers are seen bursting in behind her, seemingly killing the other scientists. Paige appears to shoot herself at the end of the video and they see her body in the lab. There are signs for Worldwide Catastrophe Killzone Department (WCKD).

Gally has actually followed the group and demands they all return to the glade. He tries to kill Thomas but kills kindhearted Chuck who sacrifices himself to protect Thomas, and Thomas kills Gally. The rest leave the building escorted by soldiers who take them into awaiting helicopters, while the lab crew all gets up and wipes off the fake blood, pleased that the kids bought the act and that so many of the boys survived. The maze was an apparent success and Dr. Paige is eager to begin Phase 2. 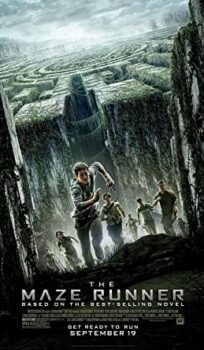