After the attempt to hunt and kill the second Meg -Megalodon- bombs and billionaire Morris (Rainn Wilson) is eaten by the shark, the remaining crew at Mana One, seeing how they are basically on their own, join forces to finish the monster by themselves. The Meg heads towards a crowded beach in Sanya Bay, Southern China and attacks, wounding and killing several beachgoers in the process.

The crew catches up and uses audio of a whale call underwater to lure the Meg away from people; but, when Suyin (Li Bingbing) and Jonas (Jason Statham) attempt to destroy it using modified torpedoes and it fights back, almost killing Suyin and causing two helicopters to crash onto the ship, Jonas resolves to sacrifice himself for the rest of the group; he uses the “fin” of his sub pod and slashes the bottom of the Meg, full-length, causing it to bleed. The Meg reacts by attacking and breaking the sub pod, which forces Jonas to flee it but, also, to use a harpoon with poison to stab the monster in the eye, immobilizing it. A bunch of smaller sharks, attracted by the Meg’s blood, devour it inside and out, while Suyin and Jonas manage to swim away to safety.

They both rejoin the rest of the survivors aboard the yacht of the marrying couple who had been sideswiped by the Meg earlier -at the same time, the bride’s beloved dog Pippin, who had actually survived this attack, reappears and reunites with its owner-. Jonas and his ex-wife Lori (Jessica McNamee) make up amicably, while Suyin and her little girl Meiying (Sophia Cai) hint that Jonas should go on a vacation with them, which he smilingly agrees to. 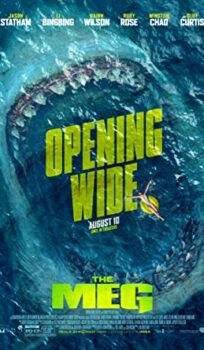