Seeking revenge for his daughter Jessica’s elopement and conversion to Catholicism, as well as for his years of suffering brutal antisemitism, Jewish moneylender Shylock (Al Pacino) refuses a double payment on the defaulted loan owed by Antonio (Jeremy Irons).  Instead, Shylock insists on the original terms of their agreement: armed with a large knife, he tells the court he is legally entitled to collect one pound of Antonio’s flesh.

The court agrees that Shylock is within his rights. However, since he can’t collect without killing Antonio, Shylock not only loses the case but is charged with plotting the murder of a Catholic — a capital offense for a Jew. But the Duke offers mercy: in exchange for avoiding the death penalty, Shylock’s wealth and business will be confiscated. Also, he, too, must convert to Catholicism. Realizing he’s beaten, he agrees.  Shylock is shunned as a pagan by the entire Jewish community and is shut out of the synagogue. Ruined and destitute, his lust for revenge has left him hated by everyone in Venice.

The final scene (not in Shakespeare’s play) reveals that Jessica still wears her late mother’s ring. Jessica never did trade it, as Shylock had been crushed to hear she had done.  Jessica gazes sadly at the ring, knowing her father is now totally alone. 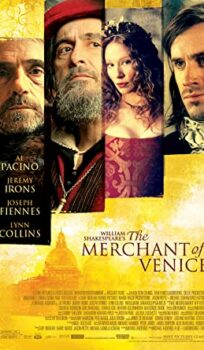