This movie is primarily a slice of life drama focusing on 2 army men whose job is to notify next of kin when a soldier dies.  All of the subplots weave in and out of each other, but I’ll sum them up separately to make it easier to follow.

One man is Captain Tony Stone (Woody Harrelson).  He enlisted during Desert Storm and saw no actual combat.  He returned home and became an alcoholic.  Colonel Stuart Dorsett (Eamonn Walker) got him to sober up and gave him a second chance by giving him this job.  Out of a sense of loyalty, he has continued to do this job even after he is eligible to stop.

The other man is Staff Sergeant Will Montgomery (Ben Foster).  He enlisted during the current war and was badly wounded and is now considered a war hero.  He has 3 months left of service before rotating off and has been given this job as an easy way to finish out his time.  Later in the movie, he reveals that he and his team were under sniper fire and he got some soldiers to safety and then he saw one of his men lying in the street with his leg shot off.  He carried him behind a car and as he put him down an IED exploded right under him.  Montgomery laments that pieces of his friend are embedded into him like shrapnel and he refuses to think of himself as a hero since his actions got his friend killed.

There’s a subplot involving the broken relationship between Montgomery and his former flame Kelly (Jena Malone).  When he returns home, they make love, but then she tells him that she is engaged to someone else and even though she invites him to her engagement party, she asks him to please decline.  He shows up anyway and horrifies her and her fiance, but then he leaves before anything worse happens.

There’s another subplot involving Stone trying to establish any sort of connection with women.  He picks up a bartender but that fizzles out when he has to leave for work and kicks her out of his house.  Later, he and Montgomery pick up 2 women and Stone has loud passionate sex with his date while Montgomery sits uncomfortably with his date.  This subplot ends with Stone drinking beer and falling off the wagon, but in the end he tearfully sobers up after Montgomery gives him the details of his war injury.

The majority of the movie focuses on them driving to peoples houses and delivering the bad news.  Stone has been doing this for a long time and has a very rigid set of rules on how to handle this.  They include not touching the next of kin, not saying good day or good afternoon (there’s nothing good about what they have to say), sticking to a cookie cutter script and leaving as soon as they are done, and definitely not developing any sort of emotional connection.

Most of the notifications are done and they have no further contact during the course of the movie.  One exception is Dale Martin (Steve Buscemi), who is enraged at the news of his son dying and physically shoves Montgomery and spits in his face.  Later in the movie, they cross paths again and he says that he is not good with words and his last conversation with his son was not very meaningful and it greatly bothered him and he is embarrassed by his actions and asks Montgomery for forgiveness.  Montgomery assures him that there’s nothing to forgive.

The other exception is Olivia Pitterson (Samantha Morton).  They notify her and her cool reaction makes Stone think she was having an affair (he also noticed she was cleaning a man’s shirt which makes no sense if she was alone).  Montgomery becomes obsessed with her and intentionally runs into her at the mall a few days later.  They become friends on the verge of more even though they both have their reasons not to pursue a relationship (she just lost her husband and he is with a recent widow).  She eventually decides she needs to move away to get a fresh start.  On the day of her move, he comes over to help and she admits that she hated who her husband had become after 2 previous deployments and she felt like the man she loved was already dead before his 3rd and final deployment.  The shirt that she was cleaning was one of her husband’s that she had found right before they showed up.  She said it smelled like hate and fear and she didn’t like it at all, so she was cleaning it and that’s why they saw a man’s shirt when they initially showed up.  After loading her belongings into the moving truck, he asks her to write to him when she gets settled in which she agrees to.  Then she asks him to come into her house to write down his mailing address.

That’s how the movie ends, you are left to wonder if anything else happens when he enters her house. 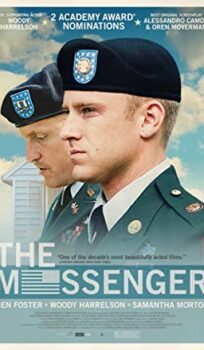