While saving Michael (Eddie Griffin) from the Golden Lords, Jeff (Robert Townsend) accidentally reveals to the gang that he is indeed Meteor Man. Also, he notices that his powers are diminishing, as a result of the meteor deteriorating.

Tired of the revenge the Golden Lords were taking on the community for Jeff’s superhero actions, the community members have a meeting and decide that they need to get Jeff to leave the neighborhood, and if they could do that, then maybe they could make a deal with the gang. Jeff tells them he’ll go, but he also tells them that they need to stand up and fight for their beliefs instead of doing nothing but complaining.

One night, Jeff is called out by the Golden Lords’ Chief, Simon (Roy Fegan), to come face him in the street. Simon starts beating him up, but before he can kill him, the other community members come to Jeff’s aid and start attacking the gang. The mute vagrant Marvin (Bill Cosby) attacks the gang by using the powers from a chunk of the meteor that he kept, but in the midst of the battle, he drops it. Jeff and Simon both grab hold of it and break it in two, causing them both to gain superpowers. They fight, and Jeff eventually emerges the winner. He then ties up Simon, absorbs his power, and scares the other Golden Lords away.

Byers (Frank Gorshin) and his mobsters then show up, armed and ready to kill Jeff. Before they can, the two street gangs Jeff united and turned to good earlier in the film show up to assist him, outnumbering and outgunning the mobsters. Byers and company try to flee, but they are caught by arriving police officers. 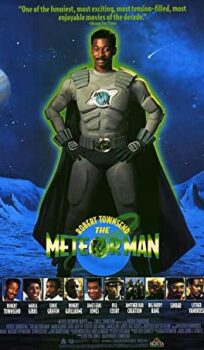