Short pooper:
Augustine (George Clooney) dies. Young “Iris” (Caoilinn Springall) was a figment of his imagination. The sole survivors of the entire human race are Sully (Felicity Jones) and Adewole (David Oyelowo) and they head back to K-23.

Longer version:
After the second meteor shower that injures and kills Maya (Tiffany Boone), Sully communicates, once more, with Augustine -who had managed to make it, with Iris, to the second antenna, after a perilous journey-; he recommends the rest of the crew to return to K-23 and start anew there. Mitchell (Kyle Chandler) discovers a days-old message from his wife (Miriam Shor), telling him their children were already sick and they were all being evacuated to an undisclosed, underground location -it is left untold whether they succumbed to radiation, like the rest of humanity seemingly did-. Then, he also sees images of a planet Earth completely obliterated from the cataclysm and decides to do the trip back with everyone else. However, he has a change of heart and, instead, asks to have one of the re-entry shuttles to return home -obviously to certain death-; Sanchez (Demian Bichir) joins him, to bury Maya. They take off together, along with Maya’s body, and are last seen going through the atmosphere.

Being already certain there is nothing left to search on Earth, Sully reaches out, one last time, to an already moribund Augustine, realizes who he is, and tells him how he inspired her to join NASA and that he obviously knew her mother Jean (Sophie Rundle). He figures out she is the child Jean denied having had with him “but, instead, with someone else”; a visual of a young Sully (also played by Caoilinn Springall) sitting in the back of the car is shown. The “Iris” we’ve seen throughout the movie was just an illusion he created to boost his morale and give him the strength to keep going until the end.

Augustine tearfully expresses gratitude for finally meeting his daughter while, at his request, Sully relays on him what K-23 looked like. At the same time, he is seen, alone, gazing around as if he were experiencing that same landscape; then, he is heard no more. Realizing he must have died, Adewole and Sully, now the only two humans left, set course towards K-23, with the hopes of beginning a new life and a new break for humanity. 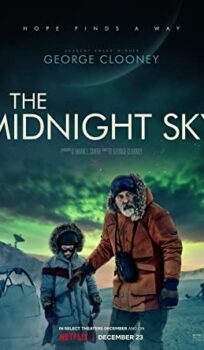