Pooper:
Cardinal Altamirano sides with the European powers, transferring the native’s land to  Portuguese control and revoking the Church’s protection of the missions. The Jesuits and Natives decide to defend their Mission from the Europeans and almost all are killed in the subsequent battle.

Long Ending:
The Palme d’Or-winning film is based on true events. Set in the 1750s, the film is narrated by Cardinal Altamirano (Ray McAnally) . He describes that the Jesuit order of the Church had been working closely with the native Guarani peoples in Latin America within territory controlled by Spain. In Spanish territory, Church missions are protected, natives can control their own property within the Missions, and slavery is outlawed. Jesuit Father Gabriel (Jeremy Irons) has opened communications with a formerly hostile Guarani territory living above massive waterfall. Father Gabriel uses music as a means of overcoming the language barrier.

While living in the Mission, Father Gabriel meets a mercenary Spaniard named Rodrigo Mendoza (Robert DeNiro). Mendoza captures Guarani people who journey outside the borders of the Mission and sells them as slaves in Latin America territory controlled by Portugal, where slavery is legal. When Mendoza returns from one trip into the mountains, he learns that his fiancée has fallen in love with his brother. In a fit of jealous rage, he attacks and murders his brother. Although Mendoza goes unpunished for his actions, he falls into a deep depression and takes refuge in his local Church.

While on leave from his Mission, Father Gabriel counsels Mendoza and convinces him to repent by returning with him to the Mission. Mendoza, along with three of Gabriel’s fellow priests including Father Fielding (Liam Neeson), begin the long trek to the Mission. As penance, Mendoza is forced to drag his armor and weapons up the mountain. When they reach the Guarani, one young warrior holds a knife up to Mendoza, recognizing him of the slaver who had captured and sold many of his fellow natives. Instead of killing Mendoza, the native shows mercy and cuts him free from his armor. Mendoza finds redemption and peace among the natives. Eventually, Father Gabriel allows Mendoza to become a priest in his order.

Trouble soon brews for the Mission. The Spaniards have noticed that the Guarani Missions have generated much wealth. They broker a deal to sell the properties containing the missions to the Portuguese, who can then enslave the natives and take command of the now-profitable Missions (and split subsequent profits with the Spaniards). Gabriel undermines the deal by arguing that the Missions would remain under sovereign Church control and protection. Accordingly, Cardinal Altamirano is sent by the Vatican to judge whether the Missions will remain under Church control or lose such protection upon the sale to the Portuguese.

The Portuguese and Spanish diplomats argue that the Guarani are akin to wild beasts and have no rights. Gabriel disproves that theory and Altamirano (himself a former Jesuit) seems awed by the farms built by the natives as well as the purity of their faith in Jesus. The Jesuits also highlight the atrocities committed by the European powers, with Gabriel noting that Guarani people only kill their third-born children because they can’t flee from slavers carrying more than one child at a time. Mendoza publicly proclaims that the Spaniards are engaged in the slave trade in violation of their own laws. Soon, the European powers try to bribe Altamirano. Though he takes the money, he says he will still be dictated by his conscience.

Gabriel takes Altamirano to his Mission, which Altamirano compares to the Garden of Eden. Nonetheless, Altamirano finally issues his judgment that the Missions will lose their Church protection when the land is sold to the Portuguese. He says that the Guarani people may return peacefully to the forest (and in doing so, they can travel back into the “safety” of Spanish territory, but must abandon their economically desirable Missions to the Portuguese). The King of the Guarani refuses this offer and says he will fight for his land. Altamirano also takes Gabriel aside and tells him if the Jesuits support the Guarani, he will be excommunicated and the Jesuit order itself may be disbanded. Gabriel says he will not fight, but that he will stay at the Mission amongst his people. All of the other priests, including Mendoza and Fielding, state their intention to help the Guarani people fight. Gabriel refuses to assist them or bless their endeavor, saying that only through love can they win (and that he doesn’t want to live in a world where warfare is the only answer). He does, however, give Mendoza his cross and says that if God approves, Mendoza will be victorious.

The Portuguese and Spanish empires send a coalition force to assault the Mission (after forcibly enslaving all the other natives in other Missions). Meanwhile, Fielding and Mendoza steal some of the munitions and weapons from the European military and train the Guarani in warfare. When the Europeans arrive, they are initially overwhelmed by the Guarani forces. Soon, however, the European’s superior firepower and numbers begin to overwhelm the Natives and  they slaughter all the warriors and Father Fielding. When they arrive at the Mission (which can be accessed only by a bridge), they find Father Gabriel leading the women and children in prayer and song. Though several soldiers object, the assault continues.

Mendoza rigged the bridge into the Mission with explosives and lies in wait to blow up the bridge when the armed forces begin to cross. While waiting, he sees an injured native child and runs out to assist him in fleeing to the woods. While Mendoza is gone, the armed forces discover and disarm the bombs beneath the bridge. Mendoza returns to the bridge and is shot after unsuccessfully attempting to blow the bomb. He lies bleeding to death as the armed forces cross into the Mission. Mendoza clings to life to watch as Gabriel and his choir advance peacefully upon the soldiers, hoping that Gabriel’s peaceful path will win the day. Instead, the soldiers open fire and kill the unarmed Guarani children and women, as well as Father Gabriel. Mendoza himself then succumbs to his wounds.

At the end, Cardinal Altamirano criticizes the European diplomats for the wholesale slaughter of the natives and Jesuits. The diplomats retort that such slaughter is simply the way of the world. Cardinal Altamirano disagrees, saying such methods are what humanity chose to inflict upon the world. The film cuts to a scene of several Guarani children who escaped the slaughter returning to the burned Mission and salvaging a violin before journeying into the forest on their own. After the credits, Cardinal Altamirano looks directly at the camera (i.e., the viewer) with a condemning stare.

The biggest difference between this film and historical events is that while the Jesuits did  organize the Native’s resistance, there is no record indicating that any Jesuit actually took up arms against the Europeans. 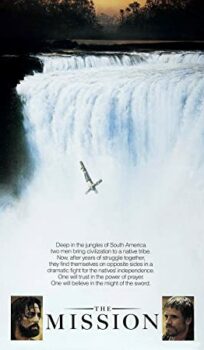