Jim switches to Mrs. Carmody’s side and the mob tries to sacrifice Billy and Amanda. Ollie kills Mrs. Carmody. David, Billy, Amanda, Ollie, Irene, Jeff and two others make it out. Ollie and the two other men die before making it to the car.

The mob stuck inside the grocery store stare as the others drive off away from the store and leave them all behind.

David drives home but because of the broken window from earlier his wife died from the creatures. They stop the car at one point and see a GIGANTIC alien with hundreds of thousands of smaller creatures underneath.

They continue driving until they run out of gas. David checks the gun and has 4 bullets but there’s 5 in the car. They all agree to take a bullet (except David’s son Billy who has been asleep the whole time but David had promised to never let the monsters get him earlier) rather than let the monsters get them. David shoots all 4 of them and then screams because he has no idea how to kill himself too so he gets out and screams for the monsters to come get him.

He hears rumbling and turns towards the sound waiting for the monsters. It’s the military with a tank truck. They have been rescuing the survivors and have killed all the monsters. David drops down realizing he killed his son and everyone else for nothing. They had actually been driving away from help.

The movie ends with 2 soldiers looking at David as he screams. 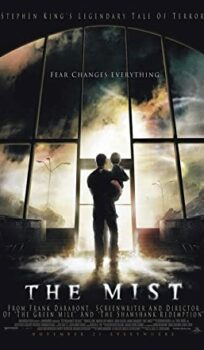