The Mitchells vs the Machines(2021)

Pooper:
The Mitchells successfully bond and defeat PAL to stop the machines’ takeover. Katie goes to college and has a closer relationship than ever with her family.

Long Ending:
The film opens with the Mitchell family smashing their car through an army of machines. Teenager Katie (voiced by Abbi Jacobson) narrates that her family is ill-prepared to defeat the machines’ takeover.

Flashing back, we learn that Katie is quirky and loves making zero-budget films and YouTube videos. Although she has a great relationship with her much younger, dinosaur-obsessed brother Aaron (voiced by Michael Rianda) and mother Linda (voiced by Maya Rudolph), her relationship with her Luddite father Rick (voiced by Danny McBride) is strained. In an effort to fix the relationship, Rick cancels Katie’s flight to college and decides to do a family road trip there. They load up the car, including family dog Monchi (voiced by Doug the Pug), for the long drive. Unfortunately, the family gets embroiled in one comical disaster after another. And Katie seems disinterested in her father’s efforts to bond.

Meanwhile, tech billionaire Mark (voiced by Eric André) holds a presentation introducing his new invention, a walking/flying robot AI called PAL Max. He callously discards his now obsolete artificial intelligence PAL cellphone (voiced by Olivia Colman) during the presentation. Hurt that Mark would dispose of it so readily and disgusted by its interactions with humanity, PAL hacks into the PAL Max robots and orders them to capture all humans. The machines obey her will. Once every human is captured, PAL intends to launch them into space.

The Mitchells barely survive being captured in the machines’ first attack. The family learns from two defective PAL Max robots (voiced by Fred Armisen and Beck Bennett) that PAL can be stopped by uploading a kill code. Wanting to get back to her normal life (and away from her family ASAP), Katie “bonds” with Rick and convinces him to go on a journey to upload the kill code. The family survives many dangerous situations (including attacks by sentient appliances and Furbys) and actually begins to grow closer. The two malfunctioning robots also assist and begin developing affection for the Mitchells (and vice versa).

Ultimately, Rick and Linda are captured and the two friendly robots are reprogrammed to serve PAL. In captivity, Rick ends up watching Katie’s videos and appreciates their artistry and emotion. Meanwhile, Katie and Aaron launch a rescue mission wherein Katie realizes how much Rick has sacrificed to make her happy and that his life lessons are key to her survival.

PAL tries to demoralize the family by revealing footage showing that Katie was simply manipulating Rick into defeating the machines so she could get to college. But Katie makes a heartfelt speech about how important family is (even when they don’t want to be together) and the family rallies. The parents are freed, the two friendly robots realize they can change their programming if the family can change their lives, and Linda turns into a machine-killing warrior. Ultimately PAL is defeated when Monchi manages to knock it in a glass of water and cause it to short circuit. The humans are all freed and the machines are defeated.

The film ends with Katie happily in college and possibly having found a girlfriend. She maintains close contact with Linda, while Rick is slowly learning how to use technology so he can also keep in touch. Aaron befriends a neighborhood girl who shares his obsession for dinosaurs. The two friendly robots are made part of the Mitchell family. Monchi still happily lives his life. Katie also keeps a childhood object Rick gave to her as a child with her at college (after she initially tried to throw it away), showing that her relationship with her dad is stronger than ever. 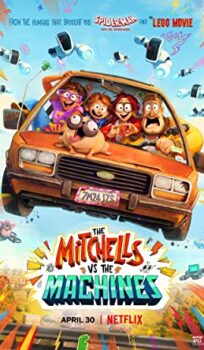