Alex Sternbergen (Jane Fonda) is a washed-up alcoholic actress who wakes up on Thanksgiving morning next to the dead body of Bobby Korshack, a local photographer. With no memory of what happened the night before, she flees his apartment and tries to leave town. Because it’s Thanksgiving, there are no flights available. She then hitches a ride from the airport with Turner Kendall (Jeff Bridges), a former policeman who was at the airport to drop off his daughter. She gets him to take her back to Korshack’s apartment and then ditches him. She spends the day cleaning the crime scene in an attempt to get rid of her fingerprints. However, Turner keeps turning up and continues to show interest in her. After several attempts to get rid of him, Alex finally allows Turner to help her, and she soon falls for him. He quickly figures out that someone is trying to frame Alex for Korshack’s murder.

The killer is Isabel Harding, the fiancee of Alex’s ex-husband Joaquin (Raul Julia), who is a hairdresser. Korshack had taken nude photographs of her, and he was blackmailing her with them. But it was Joaquin who came up with the idea to frame Alex for the murder because she wouldn’t sign the divorce papers, and a divorce would be granted if she was in prison. Turner and Alex figure out it’s them when it’s discovered that her hair found at the crime scene was actually from her wig, which Joaquin now owns. When they are at Joaquin’s home, he knocks out Turner with a large flowerpot and attempts to drown Alex. Turner comes to and shoots Joaquin in the arm just as the police arrive. Isabel, who was also at the home, confesses to the cops, but says that Joaquin was the killer, not her. He claims she killed him, so the police arrest both of them.

The final scene is in Turner’s hospital room. He tries to dump Alex in the same way that she was ditching him earlier in the movie. When she keeps coming back, it’s apparent that their relationship will continue. 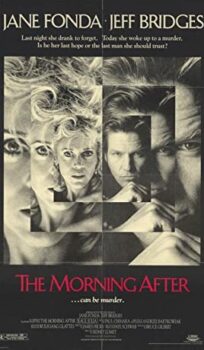