Two teams of tomb raiders race to find the burial place of High Priest Imhotep. In the process, they accidentally awake the curse of the mummy (Arnold Vosloo) and unleash its plagues on the unsuspecting people of Egypt.

As part of the curse, Imhotep “absorbs” the living organs of those who disturbed his treasures, killing Dr. Chamberlain (Jonathan Hyde); Mr. Henderson (Stephen Dunham); Mr. Daniels (Corey Johnson); and Mr. Burns (Tuc Watkins). This regenerates the mummy to his full Imhotep-ness, and allows him to try and resurrect his thousand-year old lost love, Anck Su Namun (Patricia Velasquez) in a resurrection ceremony.

Before Imhotep can complete the ceremony, Rick (Brendan Fraser), Evie (Rachel Weisz); and her brother Jonathan (John Hannah) are able to defeat Imhotep when Jonathan recites a passage from the Book of the Dead. This brings forth a ghostly chariot from the afterlife that drags Imhotep’s immortal soul away, while his physical body stays behind.

Imhotep attacks Rick one last time, but he does not realize he is now a mortal and succumbs to the sword which Rick slices through him. The three adventurers high-tail it out of the pyramid-like tomb before it collapses on itself.

One of their allies, Ardeth Bay (Oded Fehr), makes it out as well, but the weaselly, greedy Beni (Kevin J. O’Connor) does not. He ends up trapped inside the tomb with thousands of the flesh-eating scarabs. 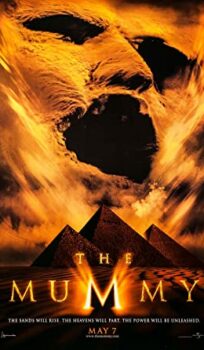