Zi Yuan (Michelle Yeoh) and Lin (Isabella Leon) sacrifice their immortality to rise the soldiers from the dead that were wrongfully killed by The Emperor (Jet Li).

Zi Yuan  engages in a battle with The Emperor, but ultimately allows herself to be stabbed by him at close range so she can reach the cursed dagger. She gives it to Lin and tells her to stab The Emperor through the heart with it.

Rick (Brendan Fraser) and Alex (Luke Ford) take the dagger and go to fight The Emperor.

Meanwhile, Evelyn (Maria Bello) and Lin fight General Yang (Anthony Wong Chau-Sang) and Choi (Jessey Meng), ultimately winning and killing them both. During the fight with The Emperor, the dagger is broken in half, but eventually Rick is able to stab The Emperor in the heart with one half and Alex stabs him in the back with the other half, fusing the dagger together and killing The Emperor.

Later, Rick and Evelyn, along with Alex and Lin, who are now also together, are back at the Imhotep, with Jonathan (John Hannah) has sold to Mad Dog (Liam Cunningham).

Jonathan moves to Peru, where not long after he arrives mummies are discovered. 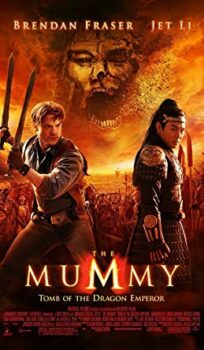