Short Ending:
Kermit and friends make it to Hollywood where they all sign a “rich and famous” contract and perform a show-stopping number (the Rainbow Connection). We then pull back to view the reactions of the muppets having just watched their own film. Sweetums crashes through the film screen, having finally made it to Hollywood. As the theater devolves into the Muppets’ signature cacophony, Kermit’s nephew Robin says he liked the movie. As the credits roll, Animal yells to the viewer at home that its time to go home.

Long Ending
We open on the set of a Hollywood studio where the two old muppet men, Waldorf and Statler, go in to the screening room to watch The Muppit Movie. The Swedish Chef mans the projector and as the Muppets watch, the film rolls.

An agent gets lost in the swamp and meets Kermit the Frog singing with his banjo. The agent tells Kermit that a big Hollywood producer is looking for a frog to use in his films. Kermit ultimately decides to journey to Hollywood. He meets Fozzy Bear in a club in a local town, and also attracts the attention of Doc Hopper (Charles Durning), the owner of a chain of fast food restaurants specializing in frog’s legs. Doc Hopper propositions Kermit to be his spokesperson, and when Kermit turns him down (for obvious reasons), he and his men follow Kermit cross-country to force him to join.

Along the way, the duo meet Dr. Teeth and his band The Electric Mayhem (featuring the drummer Animal), Gonzo and his chicken girlfriend, Sweetums (who they accidentally leave behind, and follows Kermit’s trail the whole film), Ms. Piggy, and Rowlf the Dog. Kermit and Ms. Piggy fall in love even though Doc Hopper kidnaps them both and Ms. Piggy briefly ditches the group to star in a commercial. Finally, just outside of Hollywood, one of Doc Hopper’s men betrays Doc and warns Kermit that he intends to ambush them in the next town and shoot him if he doesn’t agree to do the commercials. Kermit decides to face Doc Hopper, and they meet the two scientists Dr. Bunsen Honeydew and Beaker in that town. Doc Hopper and his men have Kermit in their gunsights, when Animal drinks a growth serum invented by Honeydew and Beaker and scares the men off for good.

The gang, finally united, make it all the way to Hollywood where they meet the big Hollywood executive Lew Lord (Orson Welles) who agrees to give them all a “rich and famous” contract. Then the muppets stage a big-budget version of the Rainbow Connection and recreate the scenes of their road trip.

The film ends and Sweetums bursts through the screen, having finally  caught up with them. The muppets all descend into great commotion, celebrating their film.

Celebrity cameos in this film: 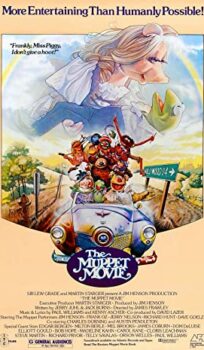