Short Ending:
The Muppets don’t raise the money to save their theater and evil oil baron Tex Richman is the sole owner of it, but they realize that they are happy being back together. As they exit the theater, they discover a huge crowd of adoring fans waiting to welcome them. Walter joins the Muppets with his newfound talent of whistling, and Gary asks Mary to marry him. Tex Richman, having been mentally injured by Gonzo, decides not to tear down the theater.

Long Ending:
Walter (voiced by Peter Linz – and briefly portrayed in human form by Jim Parsons) and Gary (Jason Segel) are brothers, although Walter is a puppet and Gary is a human. Walter, and to a lesser extent Gary, are huge Muppet fans – as the Muppets always gave Walter hope for his future. When Gary asks his girlfriend Mary (Amy Adams) to Los Angeles to celebrate their anniversary, Gary also invites Walter along so they can tour Muppet studios. Mary secretly wants Gary to propose and to stop being so attached to Walter, but thinks everything will be fine as long as they make it to their anniversary dinner.

On the studio tour, the trio finds Muppet Theater to be in horrible condition. Walter inadvertently hears oil baron Tex Richman (Chris Cooper), who has bought the Muppet theater, conspiring with Statler, Waldorf, Uncle Deadly and Bobo the Bear to tear down the theater and drill for oil beneath it. Tex had promised that he would build a Muppet museum, but he clearly lied. It is also revealed that the Muppets could buy back the theater for $10 Million, but they must do so by midnight in a week. With Gary and Mary’s help, they find Kermit and ultimately convince him to get the old gang together to put on a Telethon.

They first grab Fozzie, who is performing with “The Moopets” – a bunch of Muppet puppet impersonators – in a downtrodden Reno casino. They then set off to find the rest of the Muppets. They rescue Animal from a rehab center where Jack Black has helped him to give up the drums and remain “in control.” Sam the Eagle is hosting a conservative talk-show. Honeydew and Beeker are still engaging in science experiments. Gonzo and Camilla the chicken are running a giant plumbing corporation. Rowlf was just napping on a hammock. Dr. Teeth and the Band are playing in a subway stop. They lastly approach Ms. Piggy in Paris, where she is a high-powered executive for a plus-sized fashion magazine (with Emily Blunt reprising her role as the assistant from The Devil Wears Prada). Sweetums, as in the oiginal Muppet Movie, is left behind and must catch up with them. All the remaining Muppets are found via montage. All agree to the reunion except for Ms. Piggy, who has been spurned one too many times by Kermit, and is replaced by her Moopet impersonator.

TV executive Veronica Martin (Rashida Jones) agrees to give them airtime for a Telethon to raise the necessary money, but only if they can get a celebrity host, but all of Kermit’s contacts are either no longer famous or no longer available. Ms. Piggy returns and kicks her impersonator out of the reunion by force, but says she only returned for the sake of the other Muppets. They ask Tex to just give them back the theater, but he rudely declines and also notes that he has the rights to the Muppet brand and intends to replace the Muppets with the Moopets. Ms. Piggy devises a plan to get the Telethon off the ground and kidnaps Jack Black to host. Walter is asked to perform with the Muppets, but he doesn’t know what his talent is. Meanwhile, Gary misses the anniversary dinner and Mary returns home, leaving Gary an ultimatum – choose her or the Muppets. Eventually, Walter decides to stay with the Muppets while Gary returns home to Mary.

On the big night, the Muppets begin playing to a virtually empty theater, with only Hobo Joe (Zach Galifiianakis) and his group of hobos, Statler, and Waldorf in the audience. As the night progresses, however, the TV and theater audience grows, and other celebrities begin to show up to help the Muppets out. Jack Black is forced to host, despite pleas for rescue, and Gonzo attempts to hit a pin off his head with a bowling ball, but the ball gets stuck on Gonzo’s fingers. Tex, Bobo, Uncle Deadly and the Moopets cut off power to the building, but Gary and Mary (having successfully reunited) return to LA and restore the power. Walter, unable to find a talent, fleas the theater. Tex attempts to destroy the broadcast tower, but Uncle Deadly determines that he  is a muppet at heart and stops him. Kermit and Ms. Piggy rediscover their love, and promise each other to stay together forever. The Muppets come up one act short, but with Gary’s encouragement, Walter takes the stage and discovers he is an exeptional whistler and a true Muppet. The donations continue to roll in, but Tex finally manages to cut the power when the Muppets have raised only $9,999,999 (and later, it is discovered that the donation screen was malfunctioning and they didn’t even come that close, raising only $9,999.99). Tex gloats at his victory.

Kermit says he is still proud of the Muppets’ efforts and happy they are reunited. As Tex kicks them all out of the theater, they find a huge crowd of adoring fans and reporters waiting to welcome them. The bowling ball finally comes lose from Gonzo’s hand and hits Tex right in the chest, knocking him out. When he reawakens, he returns the theater to the Muppets and appears to be a happier person in general. Gary also finally asks Mary to marry him, and a climactic dance number ensues, in which everyone gets what they want. 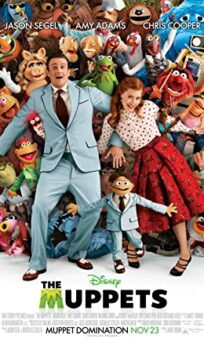