The music man is Prof. Harold Hill (Robert Preston), a traveling salesman/ con artist.  His scheme is to create controversy in a town, and then propose a boys band as a solution.  He sells instruments and uniforms to all the townspeople, with the promise that he will teach and lead the band.  Really, “he don’t know one note from another”, and he skips town with the money right after the instruments and uniforms arrive.

He arrives in River City, Iowa, to try his scheme among the skeptical Iowans.  There he finds his old partner Marcellus Washburne (Buddy Hackett) living.  Marcellus secretly helps him in his con.  Marian Paroo (Shirley Jones) is the town librarian and piano teacher.  Hill tries to seduce her, to avoid having her expose his lack of musical knowledge.  Hill also enrolls her younger brother Winthrop (Ron Howard) in the band.  Winthrop is introverted and anti-social, and refuses to speak because of his lisp.  However, Winthrop is so excited about the band that he breaks our of his shell, becoming cheerful and outgoing.  Marian is so happy with the change in Winthrop, that she does not expose Hill.

A rival salesman arrives in town to expose Hill.  Marian tries to prevent him, but fails.  This other salesman exposes Hill’s scheme to the mayor and townspeople.  They search for Hill to tar and feather him.  Marcellus tries to get Hill out of town, but discovers that Hill “got his foot stuck in the door”.  Hill has fallen in love with Marian.  Hill is dragged to the school gym, to be tarred and feathered.  Marian speaks out in Hill’s defense, pointing out how the town has become a more cheerful friendly place due to Hill.  They decide to give Hill one chance to prove the band is real.  The band assembles, and all begin to play.  They are horrible.  Hill thinks he is finished.  The parents begin to call out “That’s my Bobby”, “Listen to my Tommy play” etc…  They are so excited about their kids, they do not realize how awful the band is, and Hill is saved. 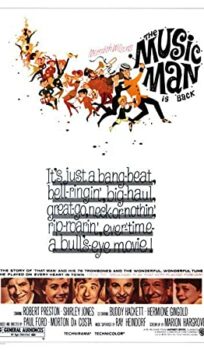