A variation of The Most Dangerous Game with very little dialogue and great scenery.

Cornel Wilde is the guide for an elephant hunting party in Africa that offends the local tribe.

The hunters are exquisitely tortured, but because Cornel Wilde showed respect he is allowed a head start to escape, after being stripped naked. Using only his wits, Cornel Wilde heads for a British fort, killing any pursuer that catches up with him. Within sight of the British fort, the pursuers send one last man to stop him but he is shot down by soldiers.

The leader of the pursuers and Cornel Wilde then exchange salutes. 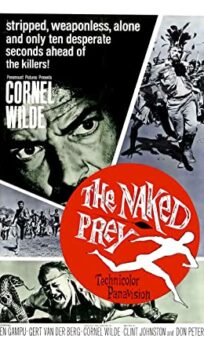