Howard Kemp (Jimmy Stewart) was swindled out of his ranch while fighting for the Union in the Civil War.  He is working as a bounty hunter to earn money to buy back his ranch.  He is after Ben Vandergroot (Robert Ryan).  With the help of Jesse, an old prospector hunting for gold, and Roy, a dishonorably discharged soldier, Kemp captures Ben in the mountains.  Kemp wants to bring Ben in alone for the whole reward, but Jesse and Roy demand shares. Kemp gives in, as he will need their help guarding Ben on the long trip back to Kansas.  Also, Ben has a young lady with him.  Lina (Janet Leigh) is the daughter of Ben’s partner who died in one of their robberies.  Lina looks at Ben as a father, and idolizes him.  To Ben, Lina is just another tool to be used for his benefit.

Ben has various angles to save himself.  He continually plays the men off each other, trying to convince each that the others will try to get the whole reward. Ben pushes Lina to flirt with the men, and get another rivalry between them that way.  Since the reward is good dead or alive, Roy wants to kill Ben to make it easy.  Kemp refuses to allow a cold blooded murder, and insists Ben must be brought back to the judge.

Ben’s tales of finding gold in the mountains finally get to the prospector.  In the middle of the night, Jesse unties Ben and Lina, and they head off to Ben’s alleged gold.  As soon as they are far from the others, Ben overpowers Jesse and kills him in cold blood.  Lina finally sees who Ben really is, and sees that Kemp is right in bringing him in.  Ben and Roy hear the gunshots that killed Jesse and come after them.  When they shoot Ben, his body falls in the river. Roy jumps in and ties a rope around the body to bring it out, but Roy drowns. It appears that Kemp has what he wants, the reward to himself.  Lina begs Kemp to forget about revenge and greed and go with her to California to start a new life.  Kemp gives in, and buries Ben by the river. 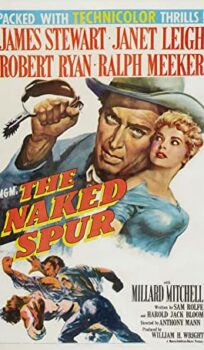