Ruby (Jena Malone), Gigi (Bella Heathcote) and Sarah (Abbey Lee) become so jealous of Jesse’s (Elle Fanning) good looks and success that they murder her and consume her dead body.

Sometime later, Gigi and Sarah are at a photoshoot and Gigi gets sick and vomits out Jesse’s eyeball. Feeling guilty, she cuts her stomach open with a pair of scissors, as Sarah calmly watches and then proceeds to eat Jesse’s eyeball, clearly unaffected and desperate to feel beautiful. 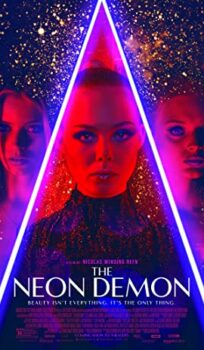