Dutra (James Spader) eventually forces a showdown against Loren (Shannon Presby) at Charlie’s (Eddie Jones) Funland amusement park after he and his gang kidnap Abby (Lori Loughlin) from a school dance. Through the handiwork of Loren, Dutra’s gang members all meet their deaths (save for Gordo [Theron Montgomery], who was attacked and killed by his own pitbull after Charlie knocked some cow blood onto him).

After the last of the gang is killed, Dutra fires his shotgun at Abby. She runs out to the gas station outside the park, but Dutra gets there first and hits her from behind with the gun. He then grabs a nozzle from one of the gas pumps and lights up the gas, and begins wielding it like a flamethrower. Before he can harm Abby, Loren appears and manages to wrench the nozzle from his grip and set him on fire, and he burns to death.

The movie then shows the park after it has been re-opened following the “Bloodbath At Funland” (as the local newspaper called it), and the park is drawing a lot more visitors now since Charlie decided to turn the whole incident into an attraction. Charlie and Fay (Lucy Martin) tell Loren and Abby that their father’s friend Colonel Jenkins (Brad Sullivan) called after hearing about what had happened at the park, and he wanted the two of them to come live with him. However, Loren and Abby decide that they want to stay. They then leave with Loren’s girlfriend Karen (Paige Lyn Price) to meet up with Abby’s boyfriend Mark (Eric Stoltz) for some fun together, but as they go, Chad (Chad Wiggins) – the younger brother of one of the gang members – watches them go with an angry look in his eyes…. 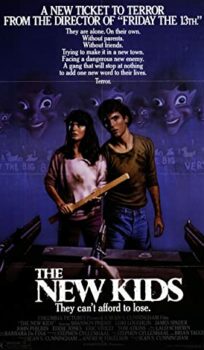