Pooper:
The detectives manage to save the last copy of the movie and get Judith Kuttner arrested but the auto manufacturers are found not guilty anyway.

Long Version:
Holland March (Ryan Gosling), a private investigator, was hired by the aunt of a murdered adult actress, Misty Mountains, to find her niece. She believes her to still be alive after she went to clean out her apartment after her death and saw her niece sitting at a desk in her living room. Holland finds out that another girl who looks like the niece, Amelia (Margaret Qualley), was in the area at the time and starts trying to find her thinking that the aunt mistook them.

Amelia hires Jackson Healy (Russell Crowe) to get Holland off her trail. He beats up Holland but then is attacked by hired killers looking for Amelia. He hires Holland to help him find Amelia so they can stop the hired killers. Holland introduces Jackson to a protest group Amelia founded to fight smog in LA where they discover that her boyfriend, an ‘art film’ director recently died in a mysterious house fire that also destroyed his latest work, an adult film featuring both Misty and Amelia.

They go to the house party of the producer of the film to find him dead and the hired assassins who are after Amelia. Amelia escapes with the help of Holland’s 13 year old daughter who tagged along. One of the assassins is hit by a car and then killed by Jackson but not before he warns them that a better hired killer, John Boy, has been sent after everyone who knows about the movie. When the police arrive the detectives meet Amelia’s mother, Judith (Kim Bassinger), head prosecutor for the Department of Justice case against the auto industry for suppressing clean car technology and anti-porn crusader. She hires them to find her daughter who doesn’t trust her.

Holland calls her mother’s assistant to inform her that Amelia is at his house and she asks the men to come make a special delivery of money to Judith for her. They discover that the money is fake and rush back to the house in time to drive off John Boy and save his daughter and her friend but Amelia runs away and is shot by him shortly afterwards.

Misty’s aunt arrives to talk to them and Jackson recognizes her description of what she saw that night as a scene from the movie, discovering that Misty’s apartment has a projector in it and she had a 2nd copy of the movie which Amelia stole. They find a note referring to the big LA auto show and that one of Amelia’s friends is the projectionist in charge of playing the commercials for new car features.

They go to the auto show to find the projectionist dead but he already spliced the film into camera so it starts showing before they manage to cut the projection. Judith’s assistant, John Boy, the one other surviving hired killer, Holland, Jackson and Holland’s daughter start fighting over the tape. Holland manages to safely retrieve the tape and give it to the police. Judith is charged with obstruction but the courts decide that there is not enough evidence against the Detroit automakers to charge them with collusion. Holland and Jackson start their a new joint detective agency called “The Nice Guys”. 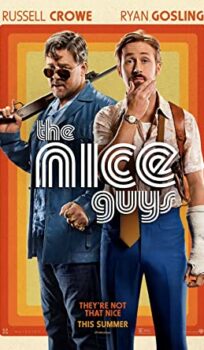