In a set of circumstances that pretty much mirrors “The Night Stalker”, Kolchack (Darren McGavin) tries to solve the mystery of a mysterious killer who’s terrorizing the city of Seattle.  He comes up with a theory that nobody belives – that the killer has been around for over 100 years, and rises every few years to kill young virile women for their blood.  (Strangely, while nobody believes Kolchack, and everybody does what they can to get him out of the way, nobody tries to pin the murders on him.)  Kolchack descends into the catacombs of Seattle, where he finds a secret shelter of a civil-war era physician (played by Richard Anderson) who keeps himself alive using an elixir created (from among other things) the blood of his victims.  Conveniently, Kolchack manages to destroy the last bit of serum before the doctor can take it.  A century of lost time catches up with the doctor, and he disintegrates before the eyes of Kolchak and some Seattle police officers who show up.  The next day, Kolchack finds that he was screwed by the police – they disavow Kolchack’s story.  In the last few minutes, we see Kolchack is on his way out of town – run out again – with his editor Vincenzo (both of them lost their jobs).  For som reason, they also have to share their ride with the beautiful but motor-mouthed Louise Harper (Jo Ann Pflug). 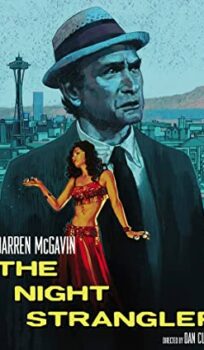