Irene Trent (Barbara Stanwyck) is married to Howard Trent, a very wealthy blind inventor.  Howard is jealous, domineering and paranoid.  He has secret recording devices all over the house, never lets her leave the house and allows no visitors.  Howard is particularly bothered because Irene has recurring dreams of a handsome young man.  Howard dies in an explosion in his home laboratory.

Irene’s dreams becoming increasingly vivid and lifelike.  Her dream lover takes her to a chapel full of mannequins, where a mannequin priest is set to marry them.  The dream turns into a nightmare when her dream lover turns into the disfigured dead body of Howard.  Irene turns to Howard’s attorney, Barry, to help her.  Irene is so terrified of sleep and these dreams that she has a young employee named Joyce stay the night.

When Irene wakes, Joyce has been stabbed and is dead.

Irene returns to the house where Howard died.  There she finds Barry with a mask of Howard’s face.  Barry reveals that he changed Howard’s will to make himself the beneficiary.  He knew it would not hold up in court if Irene challenged it.  He did not want to kill her, but wanted to drive her insane so she could not challenge the will.  Joyce was working for Barry and would drug Irene at bedtime.  The dream lover would drive Irene to the chapel where they acted out the recurring nightmare.  Barry tells Irene that with time running out to settle the estate, he will have to kill her.

It appears hopeless for Irene, but suddenly Barry is shot.  It is the dream lover guy.  When Joyce died, the dream guy realized that Barry decided to kill his accomplices and keep all the money.  However, the dream guy tells Irene that now he will kill her for the money.  Barry is injured but not dead, and rises to struggle against the dream guy.  The two fall to their death, leaving Irene alone in the house. 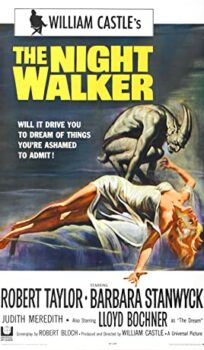