The Nightmare Before Christmas(1993)

Jack Skellington tries to take over Christmas as a substitute for Halloween, but finds out that the residents of Christmastown do not appreciate his version of their favorite holiday, and they destroy his sleigh. While pondering his situation through song, Jack realizes that he was never meant to improve Christmas, but to improve Halloween, and he returns to Halloweentown to save Sally and Santa Claus from Oogie Boogie.

Oogie and Jack face off, and Jack manages to defeat Oogie by unraveling his suit, causing all his bugs to fall out, into a cauldron of hot liquid. The last remaining one is squashed by Santa. Jack apologizes to Santa, who sternly orders Jack to listen to Sally as she is the only one who makes sense. Santa then lifts himself off, back to Christmastown, to save Christmas, and the people couldn’t be happier.

Back in Halloweentown, Jack and Sally return to the people who are all overjoyed to see that Jack survived. While celebrating, Santa returns with a simple gift for the residents, snow. While the people are distracted by a new fun activity, Sally sneaks away, followed silently by Jack. Jack approaches Sally on the hilltop, and the two kiss. 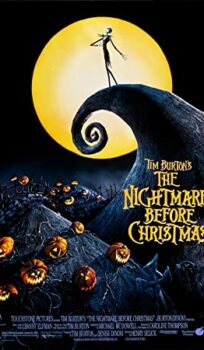