Based on the novel by William Peter Blatty

Psychiatrist Hudson Kane (Stacey Keach) is actually Vincent “Killer” Kane, a Vietnam War veteran who slaughtered thirty or forty Viet Cong with his bare hands. Yearning to repent for such an atrocity, Vincent takes advantage of a computer glitch that mistakes him for his brother, the real Hudson Kane, who is a practicing psychiatrist. Out of compassion, Hudson poses as Dr. Fell, Vincent’s medic. Vincent plays out the role of the good doctor aiming to cure the insane patients at the castle – who are more than likely faking their mental illness to get out of combat. He makes good progress with them before suffering a terrible flashback and rediscovering his true identity.

One of his charges, Cutshaw (Scott Wilson), is an astronaut who aborted his moon mission. After Cutshaw finds out that “Hud” is really “Killer Kane,” he feels betrayed, steals Vincent’s car, and heads to a local bar. A biker gang beats and berates Cutshaw, using him as a pass-around beach ball. Enter Vincent, who suffers even worse indignities from the gang while aiming to free Cutshaw from their clutches. Earlier, Vincent and Cutshaw had debated God’s existence and the problem of evil. Vincent wants to prove to Cutshaw that there is goodness in man, which stems from God. Therefore, he takes everything the gang has to give him, until he snaps – and all the bikers wind up dead at Vincent’s hands.

When the police seek to arrest him, the other officers at the insane asylum block their way. In the meantime, Vincent and Cutshaw have one final conversation. The pseudo-shrink asks the astronaut why he didn’t want to go to the moon. Cutshaw replies that he’s afraid of “all that empty space” and dying alone in the midst of it. Vincent says he’ll prove that God exists and provide one example of a man who selflessly gives his life for others. Intending to provide a shock that will bring Cutshaw out of his madness, Vincent, wrapped under a blanket, stabs himself with a knife.

“He’s dead,” Cutshaw sobs once he discovers his mentor’s suicide. “He gave up his life.” The other patients are duly jolted back to normality.

Later, Cutshaw returns to the abandoned asylum, discovering a letter that Vincent had left for him. “Killer” Kane’s St. Christopher’s medal appears in Cutshaw’s pocket in the final shot, as a sign that there’s life after death. 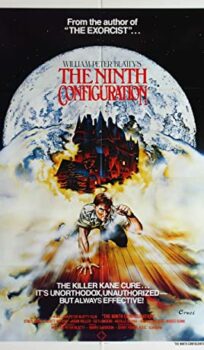