Pooper:
Although Amleth considers ending his quest for revenge, he learns that Olga is pregnant with twins. He then returns to kill Fjölnir, Gudrún and the rest of the clan (including his half-brother) in order to ensure they never come after his family. Amleth is fatally wounded in the battle and after seeing a vision that his family is safe, he is escorted up to Valhalla (basically Norse Heaven) by a valkyrie (basically a Norse angel).

Long Ending:
After ending a successful months-long war campaign, King Aurvandil War-Raven (Ethan Hawke) returns home to his clan. He was wounded in battle and tells his wife Gudrún (Nicole Kidman) that he wants to hand the throne over to their son Amleth (Alexander Skarsgård). That night, Aurvandil and Amleth visit a shaman/the King’s jester Heimir (Willem Defoe) and engage in a ritual where they ingest psychedelic herbs, envision that they are beasts in men’s bodies, and Amleth gets a vision of his visage on the tree of kings that runs through his father’s blood. Amleth is ready to ascend the throne. Soon thereafter, however, Aurvandil is ambushed by his brother Fjölnir (Claes Bang) in a coup. Fjölnir beheads Aurvandil, kills the clansmen loyal to him, appears to forcibly lay claim to Gudrún as his wife, and sends his men to find and kill Amleth. Despite the warriors’ efforts, Amleth manages to escape into the wilderness and vows to kill his uncle, avenge his father, and free his mother.

Many years later, Amleth is part of a crew of berserker warriors that ransack towns, kill all the men, burn all the children, and make slaves of any survivors. After ransacking a town, Amleth meets a seeress (Björk) who reminds him of his oath. She says that his destiny is to recover a supernatural sword, fight Fjölnir on a “lake of fire,” and help a woman ascend to the throne. Amleth learns that a batch of slaves is being sent to Iceland to serve Fjölnir (Fjölnir’s clan had since been defeated by another clan and he and his people have been banished to the wastes of Iceland). Amleth cuts his hair, brands himself a slave, and stows away on the slave ship for Iceland. Onboard, he meets a witch named Olga (Anya Taylor-Joy) who resents her enslavement. They agree to help each other in their respective endeavors (Amleth to get his revenge, and Olga to regain her freedom).

Upon arrival, they are subjected to hard labor. Amleth learns that Gudrún has borne a child named Gunnar (Elliott Rose) with Fjölnir and they appear to have a happy marriage Amleth speculates that Gudrún is pretending to love Fjölnir for the good of Gunnar and her people). Amleth finds an old sorcerer that remained loyal to Aurvandil hiding nearby. The sorcerer conjures the spirit of Heimir who tells Amleth where to find the sword and says that he will soon need to choose between exacting revenge or living for his family (which Amleth assumes refers to Gunnar and Gudrún). He retrieves the sword (defeating a demon to do so) and also slowly sows discord in the clan. He also endears himself to Fjölnir when he saves Gunnar from an enemy attack and is allowed to take Olga as his wife. Olga begins to take an active role in his plans, feeding psychedelic herbs to Fjölnir’s men to make them weak and easy to kill.

Eventually, Amleth reveals his identity to Gudrún and says he is there to rescue her. She reveals that she came to his clan as a slave and claims that Amleth is the product of his father raping him. She goes on to allege (it’s never clear if it’s true) that she loves Fjölnir and that Fjölnir killed Aurvandil on her request (and that she hates Amleth for being his dad’s spawn). Enraged, Amleth finds and kills Fjölnir’s oldest son (from his previous relationship) and reveals himself to Fjölnir. This causes a great commotion during which Olga is able to escape to freedom while Amleth is captured. Fjölni tortures Amleth until ravens (his father’s spirit animals) free him from bondage. To his surprise, Olga returns to rescue Amleth and nurses him back to health. Realizing he’s never experienced love, Amleth agrees to abandon his quest for vengeance and instead flee to a new land with Olga. As they set off on a boat away from Iceland, Amleth realizes that Olga is pregnant with twins and has a vision that his daughter is to become a great queen. Realizing the prophecies were actually referring to his children, and knowing that Fjölnir will hunt them down to end their bloodline, Amleth abandons Olga on the boat and returns to Iceland to wipe out his clan.

After freeing the slaves, Amleth kills Fjölnir’s soldiers. While searching for Fjölnir, he is attacked by Gudrún who fears he is coming for Gunnar. In the ensuing struggle, Amleth ends up killing Gudrún (who thanks him for killing her) and Gunnar while getting heavily wounded himself. Fjölnir finds his dead wife and child and tells Amleth to meet him at the Gates of Hel (a volcano – the lake of fire from the prophecy) for a final battle. After both mourn the dead, they engage in a fight. Amleth decapitates Fjölnir, but Fjölnir strikes a fatal blow at the same time. As he lies dying, Amleth gets a vision that Olga and their children are safe (and that their daughter will fulfill her destiny of becoming Queen). Amleth passes away and a gate to Valhalla (i.e., Norse Heaven) opens and a valkyrie (i.e., a Norse angel) accompanies his soul there. 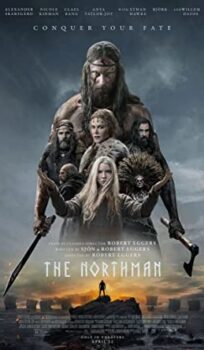