After he fatally wounds the Mouse King in a swordfight and then has Clara join him in his castle in the Land of the Dolls for a while, Nutcracker asks for Clara to stay and be his princess. Clara heavy-heartedly tells him that, though she loves him, she can’t stay, because this wasn’t her world, and that she wanted to grow up and realize her dreams. Nutcracker and all of the other dolls begin to become inanimate again, and then, the Mouse King reappears, dying but still determined to get revenge. Clara has him fall off a castle balcony into the river below, finishing him off.

Shortly afterwards, Clara awakens in her bed, and there are no signs that anything happened save the discovery of a dead ugly mouse in the toy castle and that the Nutcracker was missing. She runs straight to Drosselmeier’s workshop in town and begs to know if the fairytale he told her was real. Then, a young boy carrying a clock comes into the room, and Drosselmeier introduces him as his nephew Hans, thus confirming that everything did happen and that the curse on him was broken. The movie ends with Clara and Hans making their introductions. 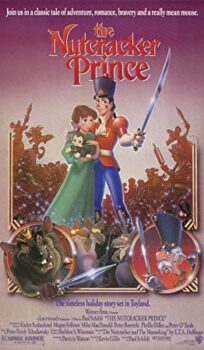