After a couple of days of being towed by the marla fish, the old man (Spencer Tracy) pulls the fish closer to the boat as it begins to circle. He harpoons the fish, killing it, and lashes is to the side of the boat before setting out on his way home, hoping that the sight of the massive fish will convince all the other fisherman that he is no longer unlucky. Unfortunately, the blood of the fish attracts a school of sharks that feed on the carcass despite his attempts to fend them off. When night comes, he is too exhausted to continue the fight. When he arrives home, all that is left of the marla is the head, the tail, and the backbone. In sorrowful disappointment, he returns to his hut.

The next day, the other fisherman are astounded by the remains of the fish. The boy comes to visit the old man and tries to console him, with the old man promising him that they will fish together in the future. Tourists mistake the fish the old man caught for a shark. Completely unaware of his newfound fame, the old man falls asleep in his hut, dreaming of lions in africa. 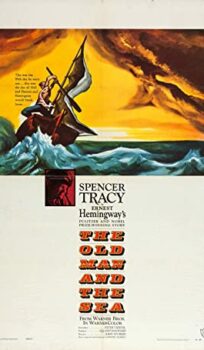