Mary Boleyn (Scarlett Johansson) becomes a pawn of her family’s ambition and is seduced by King Henry VIII (Eric Bana).  While pregnant with his child, Mary’s sister Anne (Natalie Portman) starts to turn Henry’s affections away from Mary and towards herself.  But Anne won’t give herself to Henry until he is divorced from Queen Katherine and she is his wife.  Henry eventually puts Queen Katherine asside and marries Anne but by then, their marriage is strained.  Hoping to give the King a male heir, Anne gives birth to a daugher Elizabeth and miscarries her second child.  Afraid of the King’s anger and the chance that he too will divorce her or worse, Anne asks her brother George to help her in fathering a new child.  Jane Parker, George’s manipulative wife, sees them from afar and assumes that Anne seduces George but in fact, George backs out at the last minute and Anne agrees to tell the King of the miscarriage instead.  Unfortunately, it is too late for Anne as word of the seduction of her brother has already reached Henry. Henry accuses her of witchcraft and she and George are both tried and found guilty.

Shortly before Anne’s execution, Mary goes to beg for the life of her sister (George had already been executed days earlier).  The King reassures her that Anne will be spared but as Anne is standing on the scaffold, Mary receives a letter from the King telling her that Anne will not in fact be pardoned and Mary, for her own safety, should never speak of these matters again.  Heartbroken, Mary watches as her sister Anne is beheaded.

The epilogue to the story shows Mary and her new husband raising Anne’s daughter Elizabeth and leading a quiet life away from court.

Thanks sarriesleepers…who adds:
Read the book!  It was so much better than the movie. 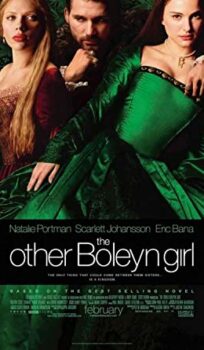