In 1885 Nevada, Two cowboys, Gil Carter (Henry Fonda) and Art Croft (Harry Morgan), ride into town looking for an old girlfriend, a drink and perhaps a fight.  Soon after they get there, word arrives at the saloon that a local, well-liked rancher has been murdered and his cattle stolen by rustlers.  The Sheriff is off investigating the crime so the Deputy Sheriff decides to form a posse on his own to hunt down those responsible for the killing. The two cowboys ride along with the gang and we soon learn they have a higher sense of justice than most of the others.

They find a group of three men, Donald Martin (Dana Andrews), Juan Martinez (Anthony Quinn) and Halva Harvey (Francis Ford) with cattle bearing the brand of the slain rancher.  The posse, now lynch mob, after learning the three men do not have a bill of sale for the cattle and a few other bits of incriminating “evidence” decides to hang the men on the spot.  A few of the sane, rational members of the group, including the two cowboys, try to convince the mob to simply bring the three into town and let the Sheriff handle it.  The mob wont hear of it but does grant a stay of execution until sun up, giving the doomed men time to put their affairs in order as much as possible.  Quinn’s character confesses his sins privately to one of the gang who will in turn take them to a priest for absolution.  Andrews’ character writes a letter to his wife, to be delivered by Mr. Davies  (Harry Davenport), the most reasonable man among them.

Sun up comes and the three hangings are carried out.  A short time later the Sheriff rides up and informs the mob that the rancher is alive and the hanged men had nothing to do with his assault.

In the most moving scene of the film, Fonda’s character reads the wife’s letter aloud in the saloon, while the mob listens.  As he reads, his face is totally hidden, except for his mouth, by his partner’s hat, emphasizing the faceless, shameful nature of mob rule and the act that had been committed.

In the final scene, we see the two cowboys riding out of town, taking the letter to the slain man’s wife with the intentions of helping her and her children. 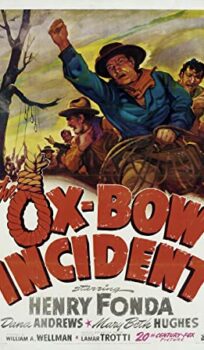