Richard (Macauley Culkin), Fantasy, Adventure & Horror make it to the Exit, and there they find a magical twister, as well as the Pagemaster (Christopher Lloyd). Richard complains to him about having to go through so many perilous things to get to this place, but the Pagemaster tells him that everything he went through was done to help him face his fears and make him a braver person. Then, the various story characters Richard encountered appear in the twister and congratulate him. He and the books are then sent back to the real world through the twister. Richard lands back in his unconscious body, and the books turn into real books and land around him.

Richard awakens, and is soon greeted by Mr. Dewey (also Christopher Lloyd). Richard initially goes to leave, but he goes back to Mr. Dewey and tells him he wants to check out all three books. Mr. Dewey tells him that only two books at a time could be checked out, but in the end he allows him to take all three. Richard goes home a much braver kid.

His parents come home that night to find him asleep in the treehouse, much to their surprise, and decide to leave him there for the night. After they go inside, the books are shown as silhouettes talking, and Adventure asks for a kiss. He meant for Fantasy to kiss him, but since he failed to say that, Horror gives him one. 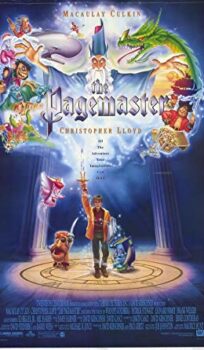