SHORT VERSION:
After Gabriel is killed by Col. Tavington, Benjamin and his militia take his body and go to the camp of Gen. Burwell and his Continental Army regiment. Burwell tries to convince Benjamin to join them in their next battle against the British (the Battle of Cowpens), saying that victory in the war will be within their grasp if they win this battle, but Benjamin’s will to fight has diminished to nothing now that he has lost two of his sons to the conflict. However, the next morning, he finds the ragged American flag that Gabriel had been spending his free time trying to repair, and this reminds him of Gabriel’s dedication to fight for America and invigorates his spirit. He thus puts the flag on a pole and rides out to rejoin his militia and the Continental Army as they are marching towards the battlefield.

As the battle rages, the Americans eventually gain the upper hand and push the British back to their front, and Benjamin fights Tavington in a one-on-one battle and kills him by thrusting a broken bayonet into his heart. Shortly afterward, the British accept that this battle is lost and thus retreat.

Benjamin and his militia continue to fight with the Continental Army in the months that follow until they secure total victory over the British later that year (with help from the French) in the Siege of Yorktown. Benjamin returns to his hometown with his family and finds his militia rebuilding his house, which had been burned down by Tavington’s Green Dragoons earlier in the film.

LONG VERSION:
After finding out that the town of Pembroke has been supplying Benjamin’s (Mel Gibson) militia, Col. Tavington (Jason Isaacs) decides that its citizens must be punished, so he goes there with several of his Green Dragoons and a bunch of British Regulars and has all of the townspeople gathered in the church (including Gabriel’s [Heath Ledger] new wife Anne [Lisa Brenner], who has just returned home with her parents after marrying him). Tavington enters and addresses them, telling them that he knows that this town has been providing aid to Benjamin and his rebels, and he says that anyone who gives up the rebels’ whereabouts here and now will be forgiven their treason. One of the men caves in and gives up the location of their base, but after Tavington thanks him, he orders the soldiers to shut the doors on both the squealer and the rest of the villagers, clarifying that the forgiveness he mentioned will be between them and God. The doors are then chained and locked and the windows shuttered from the outside before the soldiers set the church on fire, and none of the villagers escape the flames.

After Benjamin, Gabriel, and the rest of the militia find the smoldering remnants of the slaughter the next morning, Gabriel sneaks away with several of the rebels in order to find the Green Dragoons and make them pay for what they did. Gabriel and company successfully track down the Dragoons, and the two sides engage each other and sustain casualties until Tavington is the only Dragoon left. Gabriel shoots Tavington in the abdomen and he falls face-first to the ground seemingly dead, but when Gabriel goes to stab him for good measure, Tavington reveals that he was playing possum when he turns back over and runs Gabriel through with his sword, mortally wounding him, after which he escapes. Benjamin shows up at the scene soon after with some of his soldiers, and he finds and tends to Gabriel. Gabriel apologizes for the earlier death of his brother Thomas (Gregory Smith), but Benjamin assures him that he is the one to blame for that, not him. Moments later, Gabriel takes his final breath and dies.

Benjamin takes his son’s body and the rest of his militia to the camp of Gen. Burwell (Chris Cooper) and his Continental Army regiment. Burwell speaks to Benjamin while he is mourning in front of Gabriel’s body, telling him that, if he fights alongside the rest of the Continental Army, he can justify the sacrifices that his sons have made. However, the despondent Benjamin believes that the deaths of his sons is God’s way of punishing him for a past terrible act of vengeance he committed against the French during the French and Indian War, and his will to fight has diminished to practically nothing now. Burwell informs him that, if they win the next battle against the British (the Battle of Cowpens), victory in the war will be within their grasp, and he also reminds Benjamin that he matters to his men and to others as well, and his victories and losses are shared by more than he knows. The next morning, Benjamin looks in Gabriel’s bag and sees an American flag that Gabriel had spent his free time trying to repair after having first found it damaged, and this reminds him of his son’s dedication to fight for America and invigorates his spirit. He puts the ragged flag on a pole and waves it as he rejoins his militia and the Continental Army during their march towards the battleground.

After reaching the Continental Army’s encampment, Gen. Greene (Andy Stahl) tells Benjamin, Burwell, and the soldiers that Gen. Cornwallis (Tom Wilkinson) has them cornered, and not only do his forces outnumber them, but half of their own force is militia, which he considers unreliable at best. Benjamin steps forth and respectfully tells Greene that he and everyone else here underestimates the militia, and after Greene points out that militia lines have broken time and again, Benjamin tells him that Cornwallis has seen this as well, and his letters (which Benjamin managed to personally get his hands on during one raid on a British supply line) have revealed that he has no respect for the militia, so they can use his dismissiveness of them to their advantage. Later on, Benjamin arranges for the front line of the militia to fire two shots tomorrow.

The next morning, the militia forces march forth in the center of the lines to face off with the British under the combined leadership of Benjamin, Burwell, and Major Villeneuve (Tchéky Karyo). Shortly after the Americans get the first shot off, Tavington defies Cornwallis’ order to not make a premature charge and heads forth with the Green Dragoons. Benjamin sees them coming and orders the militia to fire the second shot before giving another order for them to retreat. Cornwallis commands his entire battalion to pursue them with a bayonet charge, determined to see the war end today. However, when the British soldiers give chase over the hill the Americans came up on, they find the rest of the Continental Army waiting for them, and both the Regulars and the Dragoons are heavily fired upon and start dropping like flies. Both sides then engage in physical combat, and when Villeneuve points out to Benjamin that their line is faltering, Benjamin takes up the American flag and runs towards the British front with it while yelling for the soldiers to hold the lines and not run away. After Burwell sees this, he orders the soldiers to push forward, and soon, the Continental Army starts to drive the British back. Eventually, Benjamin and Tavington lock eyes and charge at each other, but Benjamin drives his flagpole into Tavington’s horse, killing it and sending Tavington crashing to the ground. They soon engage each other in a one-on-one fight, and despite sustaining several wounds, Benjamin manages to kill Tavington by thrusting a broken bayonet into his heart, avenging his sons. Moments later, Cornwallis accepts that this battle is lost and thus sounds the retreat.

Benjamin narrates in a letter he writes to Charlotte (Joely Richardson) (the sister of his late wife that he is now married to) that the tide of the war has turned in favor of the Continental Army; Cornwallis took flight with his army and moved north. They continued to engage the British, and in the months that followed, Cornwallis entrenched himself in Yorktown, Virginia. George Washington (Terry Layman) escaped from the north undetected and surrounded Cornwallis, who could not retreat to the seas, for it was blocked off by the Americans’ long-awaited allies, the French, who had finally arrived with their Navy and Army. Though Cornwallis eventually surrendered, he hid himself in shame and appointed his subordinate to relinquish his sword. Benjamin says that, with the American Revolutionary War ending and the militia disbanding, he takes measure of what they have lost and what they have won, and his hope and prayer is that the sacrifices borne by so many will spawn and fulfill the promise of their new nation. He then asks Charlotte to tell his children that he will be returning to them all soon.

As the Continental Army’s soldiers are going their separate ways, Burwell tells Benjamin that his wife gave birth to their son three weeks ago, and they have decided to name him Gabriel. Benjamin thanks Burwell for honoring his son in this manner, then says goodbye to both him and Villeneuve. Benjamin returns to his hometown with Charlotte and his children (and we see that he has fathered a new baby with Charlotte), and he pleasantly discovers that his militia is rebuilding his home, which had been burned down by the Green Dragoons earlier in the film. His subordinate Occam (Jay Arlen Jones) tells him that Gabriel once said that they could build a whole new world, so they figured they could start right here with his house. Benjamin gives him and the rest of his men his sincerest gratitude. 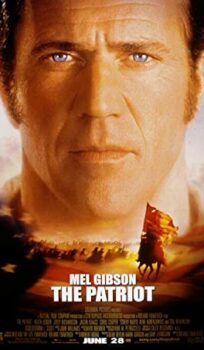