POOPER
Zak, Tyler, and Eleanor track down Salt Water Redneck, but he tells them he closed the wrestling school years ago. Tyler convinces Clint, a.k.a. Salt Water Redneck, to reopen it to train Zak. After training him for some time, Clint books Zak for a match, and it will be rigged so Zak wins. But Zak’s opponent decides he doesn’t want to lose to “a retard” and begins to legitimately hurt him. Zak fights back and is able to raise his opponent over his head (something Clint said was impossible for him to do) and throws him out of the ring. At the same time, Duncan and Ratboy arrive at the match and knock Tyler unconscious with a tire iron. Sometime later, Tyler, still recovering from his injury, is being driven with Zak to Florida by Eleanor, implying a new start for the three of them together.

LONG VERSION
Zak (Zack Gottsagen) is a 22-year-old man with Down Syndrome and no family, who is forced to live in a retirement home because the state has nowhere else to put him. Zak loves professional wrestling, and he and his roommate Carl (Bruce Dern) together watch old matches on VHS tapes. On those tapes are advertisements for a wrestling school run by Zak’s favorite wrestler The Salt Water Redneck (Thomas Haden Church). Zak, who wants to be a wrestler, convinces Carl to help him escape the facility, and once he’s out, begins walking towards that wrestling school. After walking all night, Zak, who is only wearing underwear, ends up at the local docks and decides to hide out on a boat. Meanwhile, Tyler (Shia LaBeouf), who works at the docks, has just been fired by his boss for stealing other fisherman’s crab catches. He used to be a model fisherman, but his life has lost direction since he accidentally killed his beloved brother in a car crash. It doesn’t help that his brother’s license and crab pots were taken by rival fishermen Duncan (John Hawkes) and Ratboy (Yelawolf), and it was their pots that Tyler was stealing from. Tyler decides to burn the gear used by his rivals and goes on the run himself, not realizing that Zak is hiding on Tyler’s boat. After giving Duncan and Ratboy the slip, Tyler finds Zak, but before he can question him as to why he’s on the boat, he has to abandon it on the beach because the engine died, and together they walk to town. Back at the retirement home, Zak’s caretaker Eleanor (Dakota Johnson) is ordered by her boss to go after him and return him to the facility. She finds one of the VHS tapes, and she quickly figures out that he must be heading towards the wrestling school.

Tyler and Zak reach town, but Tyler wants nothing more to do with Zak and walks away from him. But later they reunite, and this time Tyler agrees to accompany Zak to the wrestling school because it’s on the way to Florida, where Tyler is heading. He also gives Zak some spare clothes so he doesn’t have to walk around just in his underwear. Meanwhile, Duncan and Ratboy are continuing to look for Tyler. Later, Tyler and Zak stop at a general store to get some food. While Zak is hiding, Tyler goes in and while inside, Eleanor arrives and asks him and the owner if they have seen this man. She’s holding a picture of Zak, and she tells Tyler he ran away and she is looking for him. After she leaves, Tyler goes to Zak and he tells him that they now have being criminals as something in common, and they quickly become friends. As they travel on, Tyler decides to take it upon himself to become Zak’s life coach. Not only does he help Zak improve himself physically to be better prepared to be a wrestler, he also teaches him various life skills he’s never learned, such as how to swim and shoot a shotgun. The duo also agree that they could reach the school sooner if they travel by water instead of by land, so they build a raft and travel on it. While traveling, Tyler tells Zak that he needs a wrestling name, and Zak comes up with The Peanut Butter Falcon.

The next morning, Eleanor sees Zak at the beach he and Tyler stopped at the night before. She tries to take Zak back to the facility, but Zak takes her car keys and throws them in the ocean. Now forced to travel with them, Tyler tells her that she can only take care of him when he is in a cage. Just because he has Down Syndrome doesn’t mean he can’t live a semi-regular life, and this trip is proving that. After a day on the water, Eleanor realizes that Tyler is right, and she begins to treat Zak more like a person rather than a patient. She even starts to have feelings towards Tyler. But that night, Duncan and Ratboy catch up to the trio and burn the raft, but Zak is able to scare them off by pointing the gun at them. Tyler then tells Eleanor they’re the reason he’s on the run. The next day, as the trio are walking along the beach, Eleanor calls her boss to tell him she has Zak, but when he tells her he plans on transferring Zak to a facility that houses drug addicts and prostitutes, she decides not to take him back and agrees to join him and Tyler the rest of the way to the wrestling school.

Thanks to the help of a local diner waitress, Zak, Tyler, and Eleanor track down Salt Water Redneck, only to find out he closed the school years ago. Tyler talks to Salt Water Redneck, who’s real name is Clint, and he convinces him to reopen the school to train Zak. While they are training, Eleanor asks Tyler what he is going to do. He tells her that he will settle up with Duncan and Ratboy, then continue on to Jupiter, Florida, where he will buy a boat and be a fisherman again. He also asks Eleanor to come with him, and she is clearly considering it. After several hours, Clint feels that Zak has the potential to be a wrestler and agrees to book him in a match. The opponent and referee will be his old friends Sam (Jake “The Snake” Roberts) and Jacob (Mick “Mankind” Foley), and the match will be rigged so Zak wins. But when the match occurs, a drunken Sam decides he’s not going to lose to “a retard” and begins to legitimately hurt Zak. Despite being in pain, Zak gets up and picks Sam up over his head (something Clint told him during training that it was impossible for him to do), and throws him out of the ring. At the same time, Duncan and Ratboy arrive and they attack Tyler and knock him unconscious with a tire iron. The movie ends sometime later with Eleanor driving Zak and Tyler, still recovering from his injury, to Florida, implying the start of a new life together for the three of them. 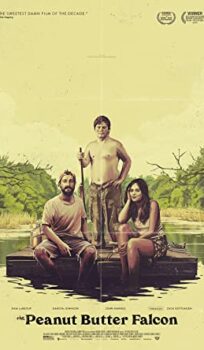